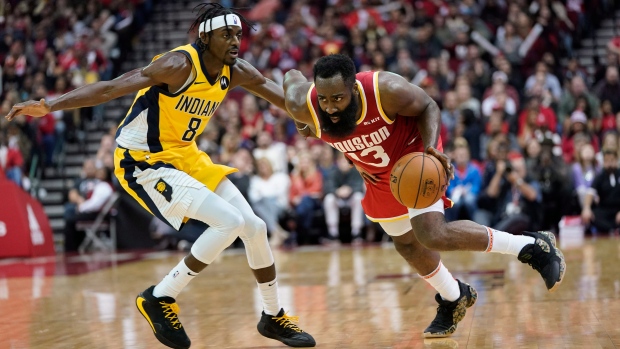 HOUSTON — The Houston Rockets got another huge offensive game from James Harden.

But it was the team’s defence against the Indiana Pacers that the Rockets thought was the most impressive part of their win.

Harden scored 44 points and the Rockets used a big fourth quarter run to pull away and get the 111-102 victory on Friday night.

Houston has won a season-high six games in a row and Harden has scored 36 points or more in five straight games to carry the Rockets as they deal with injuries to Clint Capela, Eric Gordon and Danuel House.

Indiana led by 4 on a 3-pointer by Doug McDermott before Houston used a 14-0 spurt to make it 94-88 with about five minutes left. Harden took over in that stretch, scoring the last 12 points and making two 3-pointers. The Pacers couldn't do anything offensively as Houston built its lead and missed seven shots and had two turnovers.

Harden was asked how big the team’s defence in that stretch was to the win.

“It was huge,” Harden said. “That’s the game right there.”

Indiana got its first point in almost five minutes when Domantas Sabonis made the second of two free throws with less than five minutes to go and Justin Holiday made a layup about a minute later.

But Russell Westbrook hit a 3-pointer seconds after that to push the Rockets’ lead to 10 with three minutes remaining.

Though the defence has improved during this winning streak, Westbrook still sees room for improvement.

“We’re moving in the right direction,” he said. “We’re doing a good job of staying locked in for the most part ... and it’s showing.”

The Pacers cut it to six points with a 3 by Aaron Holiday with about a minute left, but Tyson Chandler added a tip-in layup to secure the victory.

Sabonis had 18 points and 13 rebounds and McDermott added 18 points off the bench as Indiana had its four-game winning streak was snapped.

Ben McLemore had a season-high 21 points and Westbrook scored 17 with eight rebounds and six assists.

“He hit some timely 3s,” coach Mike D’Antoni said of McLemore. “His defence is always pretty good. He runs the floor. He plays really hard and he can shoot. So yeah — he was good.”

A dunk by Justin Holiday got the Pacers within four points midway through the third quarter before Houston used an 8-2 run to make it 75-65 with about four minutes left in the quarter. McLemore led the way in that stretch with two 3-pointers.

The Pacers got going after that, scoring the next 10 points to tie it with about a minute left in the third. Houston missed five shots and had a turnover to allow Indiana to close the gap.

Austin Rivers ended a scoring drought of more than three minutes by Houston after that, but Indiana scored the next four points to take a 79-77 lead.

Houston entered the fourth quarter up by 1 after P.J. Tucker hit a 3-pointer at the end of the third.

The Pacers, who were already without Myles Turner and Jeremy Lamb because of injuries, played most of Friday's game without Malcolm Brogdon after he left in the first quarter with a sore lower back.

“That’s a big loss when you’re going up against guys like Harden and Westbrook,” coach Nate McMillan said. “Not only do you need him offensively but you need his size defensively.”

Pacers: Turner missed his eighth straight game with a sprained right ankle, but could return on Saturday night. ... Lamb sat out for the fifth game in a row with a sprained left ankle. ... T.J. Warren busted his lip and was bleeding after a collision in the third quarter. He was tended to by a trainer for a few minutes and re-entered the game late in the quarter.

Rockets: C Capela missed the game and won't play on Saturday after sustaining a concussion on Wednesday night. ... Rivers scored 10 points off the bench. ... Houston made 14 of 46 3-pointers.

“Both of them are great players,” the 37-year-old Chandler said. “His dad was huge and so skilled. I think I caught him at the end of his career after injuries and all that. But his son is really good and has a bright future ahead of him.”