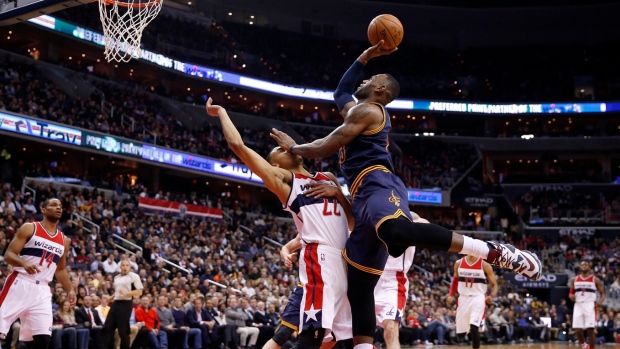 WASHINGTON - While the Washington Wizards try to promote John Wall's case for the NBA All-Star Game, Kyrie Irving put on a show to illustrate why the Cleveland Cavaliers think he should get the nod.

Irving scored 21 of his season-best 32 points in the fourth quarter of the Cavaliers' fifth straight victory, 121-115 at the Washington Wizards on Wednesday night.

While LeBron James had 34 points, Irving scored 10 points in a row in the fourth quarter and showed no ill effects from the injury that ended his 2015 playoffs and postponed his season debut until mid-December. Despite playing in just seven games this season, Irving looks like an All-Star to James.

"At the end of the day, it doesn't matter how many games, he's an All-Star player," James said. "He's much more than just an all-star. He's much better than that. He's 23 years old, and he hasn't even scratched the surface yet.

Irving had a 25-point game Monday night at home against Toronto, and it looks as if he's in midseason form.

"Those are two pretty big performances after being out for so long," Cleveland coach David Blatt said. "It's only reasonable to expect that he's going to go through a process and still have days when he's better and days when he's going to have some effect of the many months that he was out. But it sure didn't look like that tonight."

Irving turned the ball over to Nene early in the fourth quarter, which led to a layup by Ramon Sessions that tied it. Irving then reeled off 10 consecutive points while the Cavaliers' defence got some timely stops.

His fourth-quarter performance certainly caught the attention of his teammates, who see how much Irving is improving in the weeks since he returned.

"It was nuts," said guard J.R. Smith, who hit five 3-pointers and had 25 points. "To do what he's doing nine or 10 months to get back and still be able to come out there and shake and bake like he's doing it's remarkable."

The Wizards had one of their best offensive performances of the season, but their defensive letdowns proved frustrating.

"We did a bad job of knowing personnel in certain spots of who we wanted to shoot the ball," Wizards forward Jared Dudley said. "I thought we scored enough to win the game. ... Overall, not enough stops to win."

James hit 3-pointers on four of five possessions, and the lead got to 18 at one point. But the Wizards came back enough to put a scare into the Eastern Conference-leading Cavs.

"Isn't that the beautiful thing about NBA basketball? An 18-point lead can go away in the drop of the hat, because the other guy's good and Washington was good tonight," Blatt said. "That wasn't an easy game."

Except Irving made it look easy. Still, he understands this is still a process of getting back into form.

"The first few games were just being able to solidify myself back in the league and being an elite athlete and get around guards," Irving said. "That was the hump I needed to get over, and now I think I'm starting to get over it going from game to game going against great matchups, great players every single night, great teams."

When the Cavaliers embarked on a long trip last season, players went bowling to try to shake off a six-game skid. Blatt didn't have plans for anything like that as his team opened a six-game road swing.

"Sometimes desperation leads to wondrous thinking," Blatt said. "And I think that was an example of that."

Cavaliers: Cleveland played its fourth game of the season with a starting lineup of James, Love, Tristan Thompson, Smith and Irving and improved to 4-0 with it. ... Thompson, who Wittman called a "beast on the boards," finished with just three rebounds.

Wizards: Nene returned from a 19-game absence with a strained left calf and Gary Neal was back in the lineup after missing five games with a strained right quadriceps muscle. ... Kris Humphries missed the game with a knee injury.

Cavaliers: At Minnesota on Friday night.