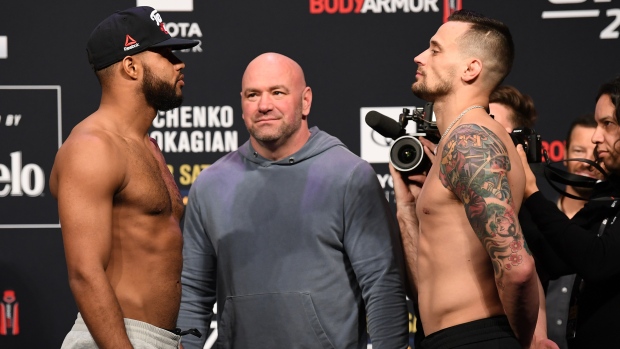 James Krause was in Houston as a coach, but now thanks to Antonio Arroyo’s withdrawal, he will step in on very short notice to headline the UFC 247 Prelims on TSN5 and TSN Direct Saturday night.

Krause, who made weight on Friday evening, will face Trevin Giles in the featured prelim bout.

“Everyone says they’re a gangster until it comes time to make gangster moves,” Krause posted on Twitter.  “24 hours notice, at middleweight, against Trevin Giles. See you tomorrow, Houston.”

Giles has suffered third-round submission losses in his last two bouts.  He was stopped by Zak Cummings at Fight Night Rochester last May and by Gerald Meerschaert at Fight Night Newark in August.

Those were the first two losses of his professional MMA career, prior to those setbacks he was on an 11-fight win streak, including his first two fights in the UFC.

Krause enters the bout on a six-fight winning streak with his last victory coming at Fight Night Sao Paulo in November over Sergio Moraes.

Andrea “KGB” Lee will try to regain the momentum she lost in her last fight, a split decision defeat at the hands of Joanne Calderwood, when she faces Lauren Murphy.

Lee was riding a seven-fight winning streak before her loss to Calderwood at UFC 242.

“I think (a win) would move me back up to where I was and I would be right where I need to be,” Lee told TSN’s Aaron Bronsteter.  “I’d be a prospect again.”

Murphy was victorious over Mara Romero Borella in her last bout, via TKO at Fight Night Newark.

The 36-year-old is 2-1 since making her flyweight debut.

On not as short notice as Krause, Kalinn Williams steps in to replace Dhiego Lima against Alex Morono.

Williams was announced as a replacement fighter two weeks ago and will be making his UFC debut in Houston.

The 25-year-old is on a six-fight winning streak and has a 9-1 professional MMA record overall.

Morono, who will be fighting in his hometown of Houston, has won his last three bouts, including victories over Max Griffin, Zak Ottow and Song Kenan.

He has a professional MMA record of 17-5 with one no-contest.

Miles Johns will face Mario Bautista to kick off the Prelims on TSN5.