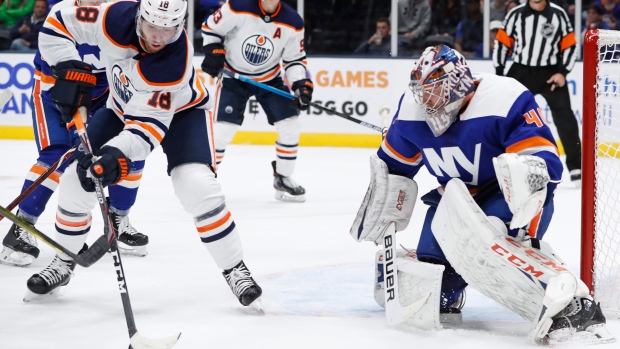 NEWARK, N.J. — Oh, to have been a fly on the wall in Brad Treliving’s office at the Saddledome on Tuesday night.

The news of James Neal’s four-goal night pinging across the continent from Long Island must have left a pit in the Calgary Flames general manager’s stomach.

Neal and Milan Lucic are inextricably linked. It’s been just three games, but this is the appetizer referendum on a one-for-one course that tastes delicious in Oil Country after Taylor Hall for Adam Larsson – especially given the Battle of Alberta implications.

Neal is pacing the NHL in goals (six) and a pointless Lucic leads the league in penalty minutes (26).

Treliving is in the middle of this mess, with a heap of blame placed squarely on Flames coach Bill Peters.

Because everyone has spent the past 24 hours asking: What is Neal doing this year that he couldn’t last year? What’s different about Neal?

Everyone is searching for a revelation or grand explanation, but the truth is: “Nothing,” Neal said.

The difference is the 'Real Deal' has gotten a real opportunity in Edmonton.

Neal, 32, is the same shoot-the-lights-out scorer he’s been since he broke into the NHL as a rookie in 2008-09 under coach Dave Tippett with the Dallas Stars.

"You just get him the puck," defenceman Oscar Klefbom said. "He does the rest himself."

Neal looks like the same 10-time 20-goal scorer he has always been, which includes that 2012-13 lockout-shortened season. It’s been just three games, but even if Neal fizzles and falls short of that 20-goal mark again, it’s clear that the aberration was in Calgary.

“I signed a five-year contract in Calgary thinking I would do this, be a go-to guy,” Neal said Wednesday, after the Oilers improved to 3-0-0. “It didn’t work out. I find myself here. I couldn’t be happier. It’s weird how things work out.”

Why was that the case?

The clearest indicator of Neal’s opportunity with the Oilers is in deployment.

Neal played a total of 98 minutes on Calgary’s top line last year, the equivalent of 15 periods of work. He’s started this season with Ryan Nugent-Hopkins and Tomas Jurco, adding a much-needed dimension to a team that was the best helicopter (no wings, all centres) in the NHL.

But his impact has been felt most on the power play.

Last year, Neal played a grand total of 16:15 over the entire season on the Flames’ top power-play unit with Johnny Gaudreau and Sean Monahan.

In just three games, Neal has already skated 12:25 on the Oilers’ top unit with Connor McDavid and Leon Draisaitl.

Some of that has come through a bit of luck. Alex Chiasson won that top unit spot out of camp because Tippett said Chiasson got the “benefit of the doubt” based on his success in that role last year.

But then Chiasson came down with an illness that kept him out of the lineup for two of the first three games.

“I give Nealer credit. He’s jumped in there and jumped on the opportunity,” Tippett said.

Neal knew he had to seize the chance to play a man-up with a Hart Trophy winner and 50-goal scorer. The result has been four power-play goals in three games.

“You know, being on that left side, with Connor being a lefty there, I felt like I could pop out and get some chances at the net because there’s heavy pressure on him and [Draisaitl],” Neal explained. “That leaves some open space for me. I’ve been there lots in my career and I’ve just tried to take advantage of it as best I can.”

It’s an opportunity and advantage that Lucic had many times in his three seasons in Edmonton. Lucic received countless passes from McDavid and Draisaitl in tight quarters on the power play.

He simply couldn’t convert – and not for lack of effort.

That is what makes this trade so difficult for Treliving and Calgary to swallow. In three games, their worst fears are being realized – and Lucic likely doesn’t have the physical capability anymore to be anything more than a third or fourth line physical presence.

Just looking at the numbers, including shooting percentage and career history, and the narrative coming off of back-to-back trips to the Stanley Cup Final – Neal was the only player in this trade who truly had the chance to rebound. Neal's shooting percentage last year (5.0) was less than half his career average (11.8).

“I think we both just needed a fresh start,” Neal said. “I appreciate [Lucic] he had to waive his no-trade clause for us to switch spots. I thank him for that.”

It’s a good bet that Lucic would not have been back with the Oilers this season regardless. But GM Ken Holland somehow found a way to turn an anvil into an engine.

Instead of digging in and forcing Peters and Neal to work out their differences, Treliving offered a get-out-of-jail-free card to Edmonton, acquiring a player with less upside and a more penalizing contract to buy out.

As Tippett said on Wednesday: “So far, so good.”

“I feel like it’s a different vibe. We’ve got a winning attitude around here,” Neal said. “I’ve gotten a great opportunity here with people that believe in me.”