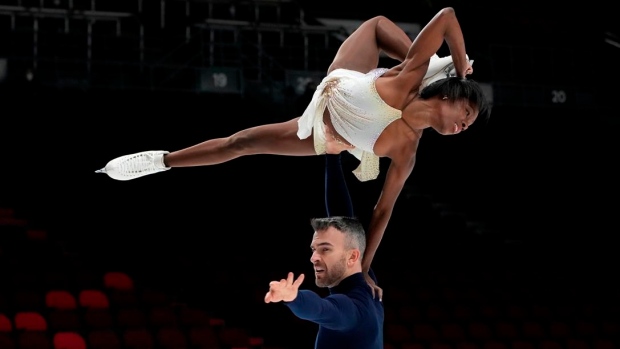 Vanessa James and Eric Radford sat in the virtually empty TD Place Arena stands on Saturday, watching as their rivals competed in the pairs free skate at the Canadian figure skating championships.

A day later, James and Radford found themselves having to defend their berth on Canada's team for the Beijing Olympics.

The veteran skaters, who contracted COVID-19 just before Christmas, were awarded one of the two berths in pairs on Sunday, despite withdrawing from the championships in Ottawa after the short program. The decision drew the ire of some skating fans.

"The criteria was stated at the beginning of the season. And so, from the beginning until now, we all have the same opportunities to perform and score, and Vanessa and I posted the highest short and free program scores internationally, we had the highest placements," Radford said. "Sport is about what you do on the field of play within the set requirements for the season."

James and Radford, who teamed up last spring, pulled out of the competition Saturday after their fourth-place finish in Friday's short program. They said they weren't fully recovered to perform at their best.

"We think we made the best decision for us, so that we can be the best in a month when it's the most important," Radford said Sunday.

The Canadian championships are part -- but not all --of Skate Canada's Olympic qualifying criteria.

The selection criteria, written before the season started, also includes scores and results from international events this season, the placement at last year's world championships, and the potential for the best finish in Beijing based on the whole season.

"Unfortunately, with all sports, in an Olympic year when you have a national championship, a lot of people assume that is the end-all and be-all in the final determining factor," said Mike Slipchuk, Skate Canada's high-performance director. "A national championship is always important and it’s important for athletes to be a national champion, to be a medallist. But when we did the assessment with our committee, we looked at all those factors ... and not one is weighted higher than the other.

"If you look at the international season, Vanessa and Eric out of all our pairs teams had the strongest scores. Unfortunately, with a situation largely out of one’s control, with Omicron and COVID, they just weren’t able to complete the event. But we look at the body of work of all athletes and we want to make the best assessment for the strongest team we feel has the best ability for us at the Games."

The rest of the Canadian team selection was more cut and dried. Kirsten Moore-Towers and Michael Marinaro secured the other berth with their excellent skates in both the short and long programs that earned them gold.

"Obviously with the climate of the world right now these Games will be extremely different ... I just heard Paul (Poirier) say it's different to not be able to hug your teammates and show them how excited you are for them. But it's been a nice day for us and we're super proud and excited."

Keegan Messing and Roman Sadovsky are Canada's men's singles entries and Madeline Schizas earned the one berth in women's singles.

“Going to the Olympic Winter Games is just such a dream,” Schizas said. “I watched the 2010 Games in Vancouver. I watched Joannie Rochette there and since then it’s just been such a dream of mine."

When it came to the contentious pairs berths, some skating fans argued that silver medallists Evelyn Walsh and Trennt Michaud were robbed.

Meagan Duhamel, who won two world titles with Radford, tweeted, with a broken heart emoji: "I am disappointed in my sport today."

"The Canadian pairs all sucked all season," Duhamel told The Canadian Press. "The only teams to do a strong short and strong long in the same competition is Evelyn and Trent and Kirsten and Mike at Canadians. And since no (pairs) team is a medal contender, we don't need to pick based on potential."

Radford, who won Olympic bronze with Duhamel in 2018 and gold in the team event, came out of retirement at age 36 to compete with James. The 34-year-old James is a Toronto native but competed for France, winning world bronze in 2018 with Morgan Cipres.

"(The season) has been up and down, but it's always been progressive, we've showed improvement, our scores have been consistently quite high for Canadian skating, and we are still looking forward to reaching higher points and levels and positions in our skating, comparing ourselves to the best in the world," James said.

"We're saddened that we couldn't compete at this competition ... we wanted to show up and try our best, show sportsmanship and give it our all, and it just didn't happen for us for the short program. It just solidified the fact that we are not prepared to do a great program that we need to show before going into the Olympics."

The number of berths allotted to each country in each of the four disciplines depends on placings at the world championships the previous year.

COVID-19 has cast a pall over the Games less than a month before they open, with athletes such as Canadian men's skaters Nam Nguyen and Stephen Gogolev contracting the virus recently.

Gilles and Poirier, who have their sights set on climbing the podium in Beijing, said they're focusing on their skating preparation rather than fixating on the virus threat.

"You can just get wrapped up in it, so we just choose to be positive, this is a very exciting time for so many people," Gilles said. "I think this is something that people really need in a time like this. We need to show the world that we can move forward and celebrate things that we love to do. So, we need to be positive about in all the things that we're going into, and it's going to be something to celebrate, not look at the negative."

Radford said while being in quarantine for 10 days leading into the national championships was frustrating, he's thankful the chance of catching COVID-19 won't constantly be on his mind.

"It simultaneously was a really annoying and bad thing to happen because it didn't allow us to prepare for this competition, but now compared to athletes that haven't gotten it yet, we can be a little bit more at ease," he said. "We'll be very vigilant still. But I can tell you, from talking to other athletes (who haven't had the virus), I know I'm more relaxed than they are at this point.

"We're both feeling a small sense of relief that we've got that over with, and now we have a little bit more of a clearer and less stressful path as we train for Beijing."

The Olympic figure skating competition begins Feb. 4 with the team event at the Capitol Indoor Stadium.