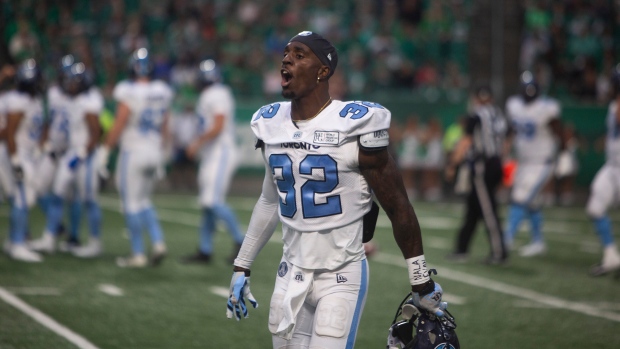 James Wilder Jr. was back at practice for the Toronto Argonauts on Monday, two days after meeting with Argos head coach Corey Chamblin and general manager Jim Popp to discuss his future with the team.

According to TSN's Matthew Scianitti, the meeting between the two sides went "well," while Chamblin said he spoke with Wilder Jr. to keep a "consistent message."

"We will never do anything to harm his career," Chamblin said after practice on Monday. "If that means making him the starter to put his career back on track we'll do that. If that means he's traded then we'll do that. We're going to do what's best for two parties: (the Argonauts) and James Wilder Jr."

The team announced the meeting would take place on Saturday after the running back was benched for the Argonauts' 41-26 loss to the Edmonton Eskimos on Friday night.

Chamblin refuted trade rumours regarding Wilder after Friday's loss, while Wilder said that though he did not want a move, he would be open to a trade if the team did not see him as an Argonauts running back moving forward.

Wilder said Friday that, despite a rib injury, he was available to play against the Eskimos, but was told by the club that he would only have a role on special teams. Scianitti reports Wilder was working with the team's special teams unit on Monday.

In five games with the Argonauts this season, Wilder has gained 161 yards on 38 carries without a touchdown. He's added 26 receptions for 260 yards with two touchdowns.