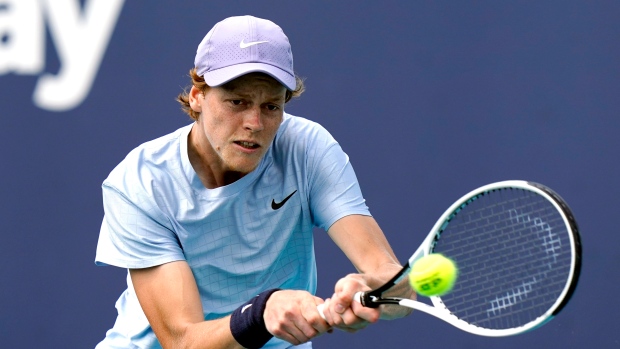 ANTWERP, Belgium (AP) — Jannik Sinner reached his fifth tour-level final of the season and stayed in contention for the ATP Finals by beating Lloyd Harris 6-2, 6-2 at the European Open on Saturday.

Second-seeded Diego Schwartzman of Argentina beat American qualifier Jenson Brooksby 6-4, 6-0 in the other semifinal match at the indoor hard-court tournament in Antwerp.

Sunday's final will be the first meeting between Sinner and Schwartzman.

The top-seeded Sinner moved closer to his fourth title this season by dispatching his South African opponent in under 90 minutes.

“I just love playing here,” the 20-year-old Italian said, noting that he reached his first ATP semifinals two years ago in Antwerp. “I love indoors. Hopefully I can play, tomorrow, also a great match.”

Sinner, who has yet to drop a set in the tournament, is chasing Hubert Hurkacz for the eighth and final spot in the ATP Finals. He also trails Cameron Norrie.

“It’s a long way,” Sinner said of trying to qualify for the season-ending competition in Turin beginning Nov. 14. “There’s still this tournament and hopefully three to go. There are other players, incredible players, everyone is trying to do that. Obviously it’s in my mind and hopefully this year. If not, I can be happy about my season (that) I played.”

Brooksby, who did not play in 2020 due to a toe injury, was aiming for his second final of the year after Newport.

Schwartzman is 5-1 against Americans this season.