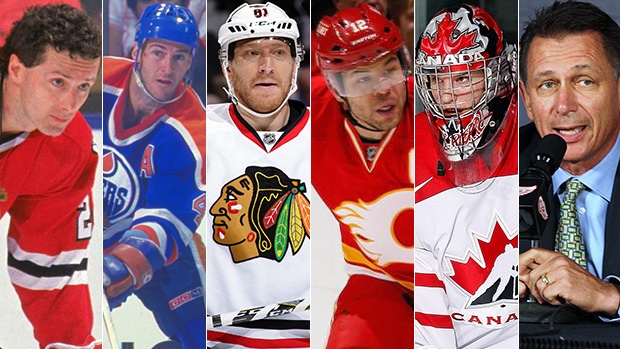 But for Kevin Lowe and Doug Wilson, a combined 43 years’ worth of wondering and wishing were wiped away on Wednesday for two decorated defencemen with one call from hockey’s hallowed Hall.

The Hockey Hall of Fame announced on Wednesday afternoon that Iginla, Hossa, Lowe and Wilson were elected in the men’s player category. They will be joined in the Class of 2020 by Canadian female star goaltender Kim St. Pierre and three-time Stanley Cup winning GM Ken Holland in the builder category.

"I didn't view myself in minor hockey as a black hockey player," Iginla said. "But I was also aware that I was."

The Hall’s traditional induction is scheduled for Nov. 16, but that is written in pencil with the COVID-19 pandemic, which also forced the 18-member selection committee to deliberate candidates virtually for the first time in Hall of Fame history.

Iginla and Hossa were elected in their first years of eligibility. Wilson was first eligible in 1996, while Lowe could have first appeared on a ballot in 2001.

To put that length of time in perspective, Wilson has been eligible since his son – Doug Wilson Jr. – was 10 years old. Doug Wilson Jr. is now 34 and has served as the San Jose Sharks’ director of scouting for a number of years.

"It was truly unexpected," Wilson said. "Pleasant shock is an understatement."

It was worth the wait.

“I’ve got tears in my eyes myself,” McDonald said.

Wilson was a tour de force on the Blackhawks’ blueline. He captured the Norris Trophy in 1981-82 as the league’s top defenceman and finished in the top five in voting three other seasons.

Wilson, now 62, racked up an impressive 827 points in 1,024 career NHL regular-season games, including nine campaigns of 50 points or more. A member of the original Sharks roster out of the 1991 Expansion Draft, he is now the second longest-tenured general manager in the NHL, in charge of the Sharks since 2003.

Wilson also owns a 39-goal season, which is the seventh-highest-scoring season by a defenceman in league annals. The other six are owned by men named Bobby Orr and Paul Coffey.

Coffey’s offensive exploits may not have been possible without Lowe holding down the fort in front of Grant Fuhr.

There were few low moments in Lowe’s storied career. All he did was win.

Lowe’s offensive numbers and individual accolades were not gaudy, which may have drawn out his bid for the Hall,  but he is the first pure defensive defenceman elected since Rod Langway in 2002.

Lowe hoisted five Stanley Cups with the Edmonton Oilers and was then brought to the Big Apple to help the New York Rangers end a 54-year drought in 1993-94. Only seven defencemen in history have won six or more Cups and now all are in the Hall, with the exception of Montreal Canadiens defenceman Jean-Guy Talbot.

"I think I perhaps represent the next level of guys who helped win championships," Lowe said. "I appreciate that my contributions to the teams I played on are being recognized this way."

Lowe, now 61, played in a combined 1,468 regular season and Stanley Cup playoff contests and won 801 of them. Those 801 wins, while a team stat, are tied for 10th all-time with now fellow Hall of Famer Scott Niedermayer, according to Elias Sports Bureau.

Down Highway 2 in Alberta, Iginla lives on as the heartbeat of the Calgary Flames, even nearly a decade since moving on via trade.

Iginla took home the Ted Lindsay Award in 2001-02 as the league’s most outstanding player, as voted by his peers. The two-time Olympic gold medallist – who found Sidney Crosby for the Golden Goal in 2010 and scored twice in the gold-medal game in 2002 in Salt Lake City – could not have been much of a debate for the Hall.

Even so, the unassuming Iginla will take his rightful place among hockey’s greats. Iginla was a late invitee to Team Canada's 2002 Olympic camp after an injury to Simon Gagne and he initially thought that call ​was a prank.

"I think they just called because I was close by in Calgary," Iginla said. "Camp had already been going on for a day. I didn't know if I belonged. But that was a big turning point in my career in terms of confidence."

Wednesday's call to Iginla was no prank. He is joined in the Hall by Hossa, who joins Chris Pronger as the only two players in Hall of Fame history to be elected while still under contract. Hossa, now 41, stepped away from the game prior to the 2017-18 season as a result of a progressive skin disorder.

When at the top of his game, Hossa starred as a 200-foot key contributor on successful teams. The proud Slovakian – who owns all of his country’s scoring records – is the only player to skate in three straight Stanley Cup Finals with three different teams (Pittsburgh, Detroit, Chicago).

For Hossa, it took until the third try, in Chicago in 2010, to lift Lord Stanley’s mug, but he helped the Blackhawks to two more in 2013 and 2015. His 525 career goals rank 35th all-time, making him a fine first-ballot selection.

St. Pierre was Team Canada’s backstop for more than a decade, from 1998 through 2011. She shares the record with Charline Labonte for most Olympic gold medals by a goaltender with three, though St. Pierre holds the distinction of being undefeated (8-0-0) with a staggering 0.78 goals against-average in Olympic competition.

St. Pierre, now 41, played boys' hockey until she was 18 and was in net when Canada won Olympic gold for the first time, simultaneously snapping an eight-game losing streak against the Americans. She also holds the World Championship records for most medals (five gold, four silver), shutouts (13) and longest shutout sequence (430:09), which spanned four tournaments.

"Hockey has always been my passion and this is a very special honour," St. Pierre said. "When I was growing up, it was only boys and when that changed, my dream was able to come true."

Few have demonstrated the ability to “build” teams like Holland, who is a fitting choice as the lone representative in the builder category this season. Holland, 64, has been at the helm of an NHL team consecutively since 1997. Prior to that, he served as the Detroit Red Wings’ director of scouting for seven years.

His eye for talent led the Winged Wheel to four Stanley Cups, including three as general manager (1998, 2002, 2008) and one as assistant general manager (1997). During his time in Detroit, before being hired by the Edmonton Oilers in 2019, the Red Wings won more regular season and playoff games than any team in hockey.

Holland recounted the story of how Jim Devellano offered him a timely scouting job with the Red Wings just two days after signing on to become an Electrolux vacuum salesman like his mother suggested.

"I am in this game because I loved it as a young man," Holland said, "and I am happy to have been able to stay in the game."

Holland is in it forever now, forever linked to five other deserving classmates.