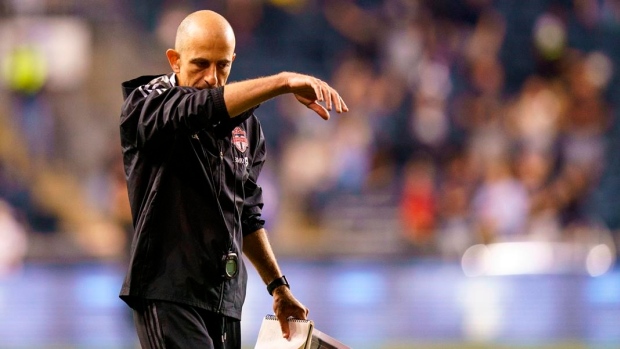 Toronto FC says Javier Perez, who took over as interim head coach after Chris Armas was fired July 4, will remain in charge for the rest of the season.

The MLS club did not detail Perez's future after that in a two-sentence statement Monday announcing it was removing the "interim" tag for the remainder of the 2021 season. Presumably the coaching job is his to win or lose.

Under Perez, Toronto has lost just once in seven games (2-1-4) heading into Saturday's game against the visiting New England Revolution.

Still, Toronto has no place to go but up. Thanks to winning just one of its first 11 games, TFC sits at the bottom of the 27-team league and is nine points out of a playoff position in the Eastern Conference — with six teams between it and Columbus, which holds down the last post-season berth at present.

TFC has shown more composure under Perez, although it has still delivered performances widely ranging in quality — sometimes n the same game. And defence remains an issue with the club having conceded a league-worst 38 goals.

Hired in mid-February to be part of Armas' coaching staff, the 44-year-old Spaniard left Toronto in late March for training camp in Florida as an assistant coach. He returned last month as the man in charge after Armas was fired with the club mired at the bottom of the standings at 1-8-2.

Toronto players like Michael Bradley, Jozy Altidore and Alex Bono worked with Perez during his days with U.S. Soccer.

With his UEFA Pro Licence and a PhD in sports science from Universidad De Leon in Spain, Perez brings plenty of qualifications to his coaching job.

He speaks Spanish and English, French and German — "all of them pretty bad,'' he joked.

He said he made the move to North America in 2009 after visiting New York City for the first time. He fell in love with the city but wasn't sure what it held for a pro soccer coach.

This report by The Canadian Press was first published Aug. 9, 2021.