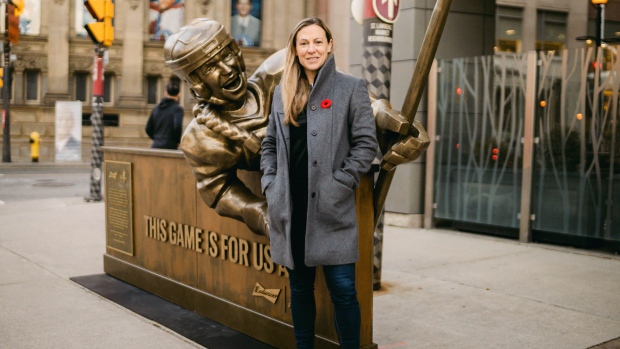 Jayna Hefford with "This Game is For Us All" monument , Laura Andrejicka

That’s the name of the new temporary monument unveiled Monday on the northeast corner of Front St. and Yonge St. in downtown Toronto, designed to spark an important conversation for hockey fans.

The statue, which features a female hockey player cheering on her team from behind a 10-foot-long board, is a collaboration between the Professional Women’s Hockey Players Association (PWHPA) and Budweiser Canada. The goal of the piece is to create discussion about gender disparity in hockey and call for greater female representation in the game. 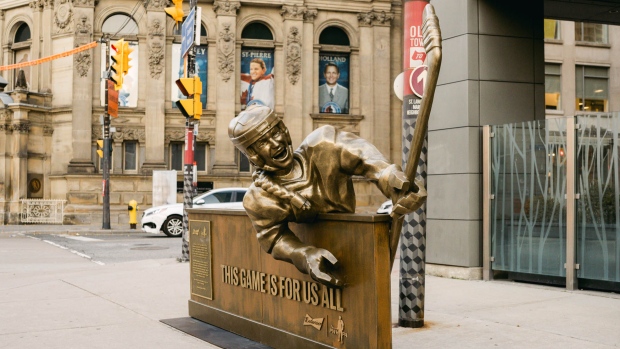 The PWHPA is a non-profit organization made up of 150-plus players that are advocating for a sustainable professional women's hockey league in North America that includes a living wage, health insurance and benefits and infrastructure in a professional environment.

Comprised of some the best players in the game, including Marie-Philip Poulin, Mélodie Daoust, Hilary Knight and Kendall Coyne-Schofield, they play in showcases across Canada and the United States, including the Dream Gap Tour.

“I think for us, we’re always trying to celebrate the game and certainly the women in our game,” said Jayna Hefford, a PWPHA operations consultant and four-time Olympic gold medallist in women’s hockey. “But also hoping to continue the conversation around change and around the importance of visibility for women, and for young girls and boys to be able to see that. That representation is important.”

Budweiser Canada is one of the PWHPA’s primary sponsors, having come on board early in the organization’s inception back in 2019.

The company’s platform has been celebrating hockey’s biggest goals with their iconic red light for years. It was in meeting with the PWHPA that the company realized it needed to expand its attention to include the women’s game.

One of the big barriers in women’s professional hockey continues to be economics. The National Hockey League secured $676 million in sponsorship money for the 2020-2021 season with an $81.5 million salary cap. In comparison, the recently rebranded Premier Hockey Federation, a women’s professional hockey league, with five teams in the United States and one in Canada, upped their salary cap this year to $300,000.

Currently, the women’s hockey landscape at the professional level in Canada is comprised of the PWHPA, which was founded in May 2019 after the Canadian Women’s Hockey League folded and the Toronto Six, the only Canadian squad in the PHF.

D’Agostini admits the focus has been too long on male players and that corporate sponsors need to step up and fill that gap.

“This movement is a rally cry not only to remind Canadians that hockey has many faces but encourage others to step up,” said D’Agostini. “I think as a partner, our goal and our objective is to show other partners, fans as well as other stakeholders in the game that we have work to do, and it starts with corporations and sponsors leading the charge and that’s what we’ve really set out to do to lead that charge around moving the game forward.”

The women’s game has struggled to receive the same visibility as their male counterparts. According to the Women’s Sports Foundation, approximately 3.2 per cent of sports media coverage is allotted to women’s sports.

The timing of the monument, which will remain up until Nov. 15, comes at an important time in women’s hockey as they look to regain momentum after the COVID-19 pandemic largely prevented players from being able to play many games.

Canada is fresh off its first gold medal at the IIHF Women’s World Championship since 2012, while goaltender Kim St. Pierre is being inducted into the Hockey Hall of Fame later this month, the eighth woman to earn the honour. In February, the marquee event on the women’s hockey calendar, the Winter Olympics, kick off in Beijing.

Hefford, who was inducted into the Hockey Hall of Fame in 2018 after a storied career, stresses the importance of keeping this conversation at the forefront.

“How do they feel a part of it and how can they find their place in the sport? And the gender part is just one side that we’re really sparking the conversation on, but it really keeps coming back to how do we make the game for everyone and make sure everyone feels a part of it.”