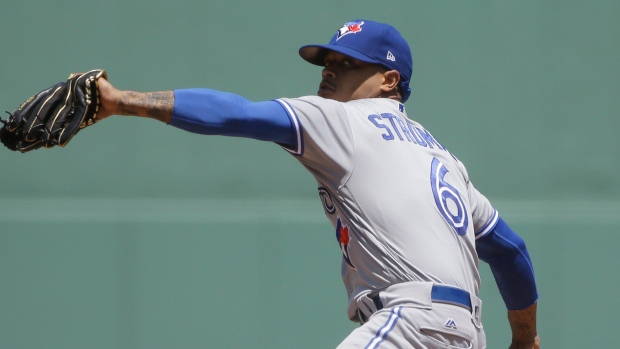 Unreal series win with my squad. On to the next! @BlueJays pic.twitter.com/4nP8frIDYb

The 28-year-old Stroman held the Boston Red Sox to five singles and struck out six over six shutout innings in a 6-1 Toronto victory on Sunday at Fenway Park.

The righty has never been one to shy away from showing his emotion and celebrated when he fanned Eduardo Nunez to end the sixth, letting out a loud yell while staring at the Red Sox dugout before skipping to his own bench.

Eckersley, now a TV analyst/broadcaster after 24 seasons playing in the majors, said Stroman's antics were "tired," while letting out an "oh please," during the broadcast.

Stroman responded to Eckersley via Twitter, first calling the 64-year-old Eckersley a "hypocrite," before throwing some added shade with a reminder of the 1992 American League Championship Series that the Blue Jays won in six games to eliminate Eckersley's Oakland Athletics and advance to the World Series.

Stroman tweeted a photo of Roberto Alomar's iconic ninth-inning, two-run home run off of Eckersley in Game 4 of the 1992 ALCS, with the former Jays second baseman watching the ball go over the right-field wall with his arms up in the air. The picture was captioned: Unreal series win with my squad. On to the next!"

When asked about his celebration at the end of the sixth, Stroman originally told reporters post-game: "That's just me showing emotion, passion for the game."