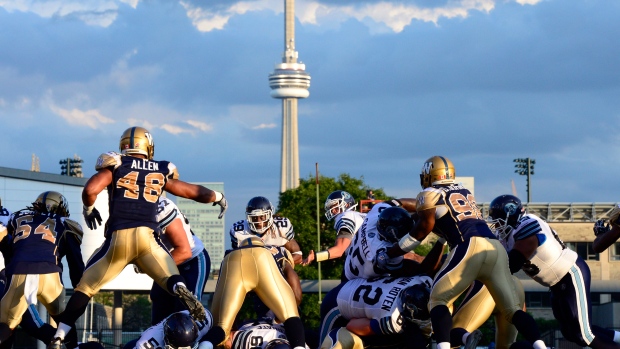 With the possibility of a Toronto Blue Jays' trip to the postseason a very real one for the first time in several years, the Toronto Argonauts could find their final season at the Rogers Centre truncated.

The 2015 Major League Baseball playoff schedule, released on Monday, features three dates that coincide with Argos home games and could force the Boatmen to reschedule or move the games elsewhere.

On October 6, the Argos are scheduled to host the Ottawa Redblacks at Rogers Centre. That will also be the date for American League Wild Card play-in game. If the season were to end today, the Jays would be hosting the Baltimore Orioles in the game.

Further down the line, if the Jays were to have home-field advantage in the American League Championship Series, Game 2 on October 17 coincides with the Calgary Stampeders visiting the Rogers Centre, while Game 6 of the ALCS goes on October 23, a date when the Argos are set to host the Montreal Alouettes.

Under the current lease agreement between the Boatmen and the Rogers Centre that expires at the end of this season, the Jays have priority when it comes to stadium usage. The Blue Jays have not made the postseason since 1993, the back end of consecutive World Series triumphs.

While rescheduling the CFL game would likely be the preferred option for the Argos, the University of Toronto's Varsity Stadium and Hamilton's Tim Hortons Field, home of the Tiger-Cats, are potential landing spots for a relocated game.

Because of the Pan Am Games, the Argonauts have only played one of their seven games at the Rogers Centre this year, a 30-26 win over the Saskatchewan Roughriders on August 8.

The Argos, 5-2, are second in the East and are next in action on August 23 when they welcome the Ottawa Redblacks to the Rogers Centre.