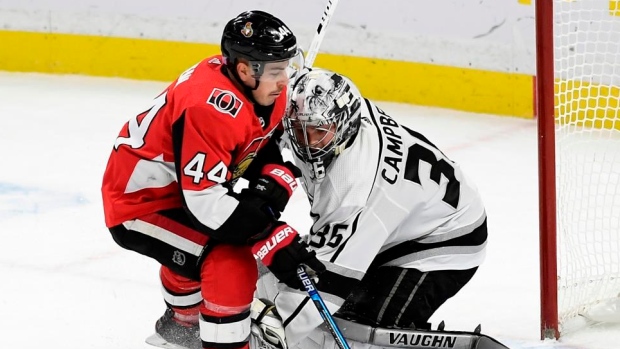 OTTAWA — The Ottawa Senators missed a golden opportunity late in Thursday's game, but coach DJ Smith was pleased with the final result.

The Senators had a chance to add an empty-netter to ice the game, but an extra pass resulted in a Kings rush and the tying goal on the opposite end.

"I was hoping it would go in the net," Smith said with a laugh of his team's final effort during regulation. "But we were a little unselfish there trying to pass it around, and it ends up in your net.

Pageau's goal in the extra frame was his team-leading seventh goal of the season. He got his own rebound at 3:12 into the extra period.

"We're starting to build something here," Pageau said of the young Senators squad, which has now won two of their last three games. "I think we played a solid game overall. Slow start at the beginning but after that I think we took over."

Still, he said he hasn't felt this comfortable offensively since he was playing junior hockey.

"I don't think my role has been offensive since I've been in the NHL. It doesn't matter. I take a role defensively against good players… it's a good challenge every night. I want to defend. If you defend well it'll create some chances offensively," said Pageau. "I'm just happy we won a game."

Toffoli, a former Ottawa 67, expressed frustration with his team's loss. The Kings are now tied for last place in the Pacific Division with the San Jose Sharks.

"I don't think anybody in this room wants to be playing to lose. We're playing to win games and we're frustrated," he said. "We want to be winning games and that's a big point we all wish we could have had."

Anthony Duclair and Artem Anisimov were the other goal-scorers for Ottawa.

Duclair knotted the game at one with two minutes left in the second period with his sixth goal of the season while Anisimov put the Senators ahead 2-1 midway through the third.

Dustin Brown opened the scoring for Los Angeles at 6:51 of the second period, going top-shelf on the backhand. Anze Kopitar had the helper, his 15th point.

Brown's fourth goal of the year came after a giveaway from Connor Brown at centre ice and a massive hit by Drew Doughty on Pageau.

Doughty, who had a few words with Brady Tkachuk — brother to Calgary Flames forward Matthew Tkachuk, who Doughty has an ongoing rivalry with — got tangled up with Thomas Chabot at the end of the second period and was favouring his left leg for most of the third.

Both teams were held scoreless after the first, tied with nine shots apiece.

The best chance came just before the midway point of the first. Jeff Carter was sprung on a partial breakaway but Mark Borowiecki made a sliding defensive effort.

Los Angeles coach Todd McLellan said although his team was aggressive through the game, he still didn't characterize the game with many positives.

"I would sum it up as an ugly game," said McLellan. "But one we had a chance to win in overtime and we couldn't take advantage of it."

Ottawa won both meetings last season against Los Angeles and for the second time in franchise history the team has defeated the Kings in three consecutive games.

Notes: Jonathan Davidsson made his NHL debut after being called up from the AHL’s Belleville Senators… Trevor Lewis left the game for the Kings midway through the second with a lower-body injury and did not return… Attendance was 9,929… Ottawa announced prior to the game that forward Colin White has been assigned to Belleville after being out since Oct. 23. He’ll be on a conditioning stint while recovering from a hip flexor/groin injury.