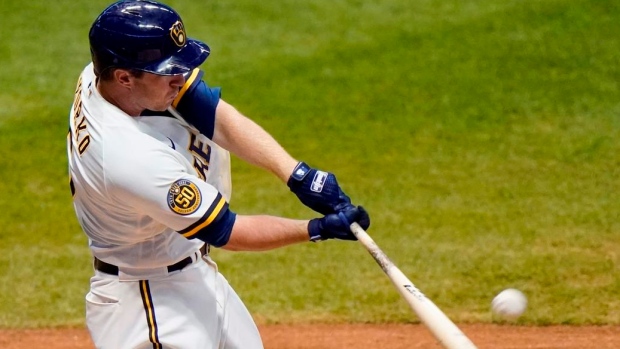 MILWAUKEE — Jedd Gyorko blasted a tiebreaking two-run homer in the eighth inning as the Milwaukee Brewers came from behind to beat the Minnesota Twins 6-4 on Tuesday.

The Brewers started their winning rally when Christian Yelich beat the Twins’ shift with a one-out double. With the Twins moving their infield to the right against the left-handed hitter, Yelich responded by hitting a grounder up the third-base line and into left field.

Gyorko followed with a shot to centre off Taylor Rogers (1-2). Twins centre fielder Byron Buxton made a leaping attempt at a circus catch, but Gyorko's drive sailed over him.

“It felt good off the bat,” Gyorko said. “I know that guy out there in centre field for them pretty much catches everything. So, you’ve got to hit it about 10 feet past the fence or he’s going to catch it. But off the bat, I thought it had a good chance and fortunately it went out.”

Rogers entered in the eighth inning of a tie game one night after working the ninth to earn his fourth save.

“Rog has been so great for us,” Twins manager Rocco Baldelli said. “We’re going to rely on Rog in absolutely the most important and biggest spots we can run into late in the game."

Rosario, whose grand slam accounted for the Twins’ only runs in their 4-2 victory at Milwaukee on Monday, helped give Minnesota a 4-1 lead by homering on his first two plate appearances. The Brewers rallied to tie the game because of Manny Pina’s solo shot in the fifth and two-run blast in the sixth.

The Twins took a 2-0 lead in the first inning as Jorge Polanco and Rosario hit solo shots off Josh Lindblom that landed in a nearly identical spot just inside the right-field foul pole.

Milwaukee cut the deficit in half when Garcia led off the bottom of the first by homering to left off Tyler Clippard, who worked just one inning as the opener in a bullpen game for the Twins.

Garcia improved to 3 of 6 with three homers in his career against Clippard.

The Twins stretched out their lead in the third when Rosario homered to right after Nelson Cruz drew a leadoff walk.

Lindblom recorded a career-high eight strikeouts — he had struck out seven in his last start — but gave up those three homers in his four-inning stint. Alex Claudio, Eric Yardley, David Phelps, Devin Williams (1-1) and Josh Hader combined for five innings of shutout relief.

Hader walked one and struck out three in the ninth for his third save.

Pina sparked the Brewers’ comeback. He led off the sixth by homering to left off Matt Wisler. The Brewers later got two-out singles from Orlando Arcia and Avisail Garcia to put runners on the corners, but Trevor May ended the threat by getting Keston Hiura to strike out looking.

On Pina’s next trip to the plate, he blasted a 3-0 pitch from May over the wall in right-centre for a two-run shot that tied the game at 4-all.

“I don't like swinging 3-0 because sometimes we try to swing too hard or something like that,” Pina said. “Most of the time when I do it, it's a pop-out or ground ball. Then I see (third-base coach) Eddie (Sedar) and Eddie gives me the green light, ‘Swing the bat,’ so I say OK, I'm going to swing, but the pitch has to be middle-middle. That's what I was looking for."

Twins: Catcher/infielder Willians Astudillo was activated from the 10-day injured list and optioned to the team’s alternate training site. Astudillo had tested positive for COVID-19 when he reported to summer camp at the beginning of July.

Braun, who hadn’t played since July 29 due to an infected right index finger, was in the starting lineup Tuesday as a designated hitter.

The Twins acquired infielder Ildemaro Vargas from the Arizona Diamondbacks for cash considerations.

Vargas, 29, had gone 3 of 20 in eight games with Arizona before getting designated for assignment on Thursday. He batted .269 with six homers and 24 RBIs in 92 games last season.