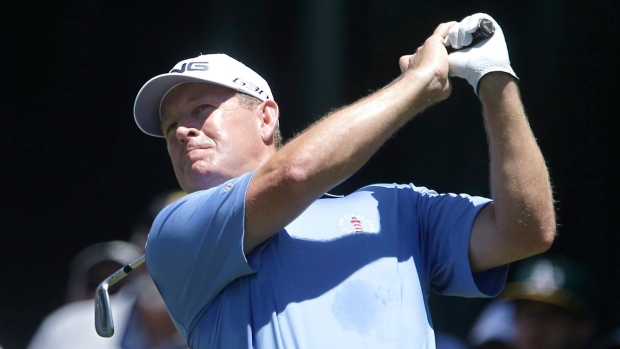 Maggert shot an 8-under 63 on Thursday in perfect conditions at Phoenix Country Club to take a one-stroke lead over Langer, with Miguel Angel Jimenez, Paul Goydos and Steve Flesch another shot back, and Kelly and Goosen at 66 with Lee Janzen and Scott Parel.

Maggert entered the season finale 34th in the standings, just three spots from failing to qualify.

Playing alongside McCarron — tied for 22nd in the 34-man field after a 69— in the final group, Kelly bogeyed the par-4 16th and parred the final two. Kelly needs a victory or help from McCarron to take the season title.

Coming off a playoff loss to Montgomerie on Sunday in California, Langer closed his bogey-free round with a birdie on the par-5 18th. Langer is third in the standings, putting the 62-year-old German star in position to win his sixth Charles Schwab Cup title — with help from McCarron and Kelly.

Montgomerie, fourth in the standings, had a 67.

Goosen, at fifth in the standings, is the last player with a chance to take the season title with a victory.