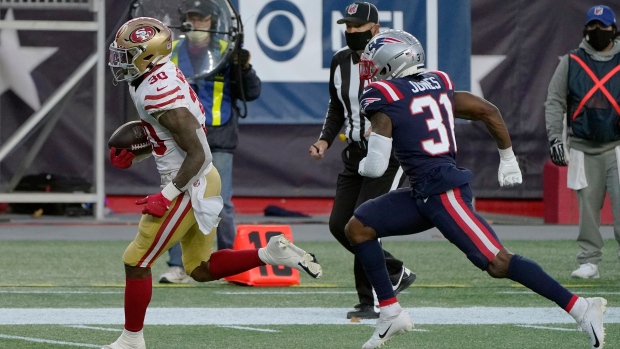 FOXBOROUGH, Mass. — Jimmy Garoppolo was once considered to be the man in waiting to take over at quarterback in New England for Tom Brady.

Now he’s the guy who helped hand the Patriots their worst home loss under Bill Belichick.

Jeff Wilson Jr. rushed for a career-high three touchdowns and 112 yards before leaving with an ankle injury and the San Francisco 49ers crushed New England 33-6 on Sunday.

Garoppolo finished 20 of 25 for 277 yards with two interceptions in his first game against his former team. San Francisco (4-3) has followed back-to-back losses with consecutive wins and is 3-0 on the road.

“It was an exciting night. Lot of emotions. Couldn’t imagine it going any better than this," Garoppolo said.

The Patriots' 27-point loss was their largest at home under Belichick. They had gone 286 games without a three-game losing streak, the longest span between three-game slides in NFL history. New England fell to 2-4 for the first since Belichick’s first season in 2000, when the Patriots went 5-11.

“We were clearly out-coached, outplayed. Just out-everything,” Belichick said. “We’re still a long way from where we need to be. That’s obvious.”

San Francisco's Brandon Aiyuk had six catches for 115 yards and Deebo Samuel had five catches for 65 yards before leaving the game with a hamstring injury.

"When we got them down, we got to keep them down, don’t want to give them any chance to breathe. I thought we did that tonight," Garoppolo said. “Started from the first snap and carried its way throughout the whole game.”

Cam Newton struggled for the Patriots, completing 9 of 15 passes for 98 yards and three interceptions before being replaced by Jarrett Stidham in the fourth quarter. Stidham was 6 of 10 for 64 yards and an interception.

Belichick said his plan is to keep Newton as the starter.

Newton was out of sync from the outset, making poor reads and poorer throws. Garoppolo, meanwhile, was successful in spreading out New England’s defence with a steady diet of passes behind the line of scrimmage and jet sweeps to get the ball into the hands of Wilson, Samuel and tight end George Kittle.

San Francisco dominated the first half, taking a 23-3 lead, holding the ball for 22:30 and racking up a 301-59 advantage in total yards. The Patriots managed four first downs to the 49ers’ 18.

The Niners took just over five minutes and nine plays to march 75 yards and take a 7-0 lead on 3-yard run by Wilson. It was the first time the Patriots have allowed a touchdown on an opponent's opening drive at home since Week 4 of 2016 against Buffalo.

Following a Patriots punt, San Francisco was pinned inside its 15. Long completions by Garoppolo helped erase some early penalty losses before he missed high on a pass for Kittle and was intercepted by Devin McCourty.

That wasn’t the case for the Patriots later in the second quarter.

Trailing 10-3, Newton made a bad play worse when he tried to dump off the ball on the run to receiver Jakobi Meyers. It was picked off by linebacker Fred Warner. Five plays later, the 49ers capitalized on a 4-yard touchdown run by Kyle Juszczyk.

The lead grew to 23-3 with just under a minute to go before halftime on a 16-yard run by Wilson.

“D just played impressive the whole day. I thought special teams and offence did, too. It was an extremely physical game,” 49ers coach Kyle Shanahan said. “It was fun to watch.”

49ers: WR Richie James left with an ankle injury. ... Wilson had just crossed into the end zone following his third TD when his leg twisted as he was tackled. He stayed down on the field before walking off under his own power. Shanahan said the tentative diagnosis is a high ankle sprain. “Not sounding great right now,” he said.

With an 11-yard pass to Jakobi Meyers in the third quarter, Newton became the 48th NFL quarterback to reach the 30,000-yard plateau.

The 49ers head to Seattle next Sunday. The Patriots visit Buffalo.