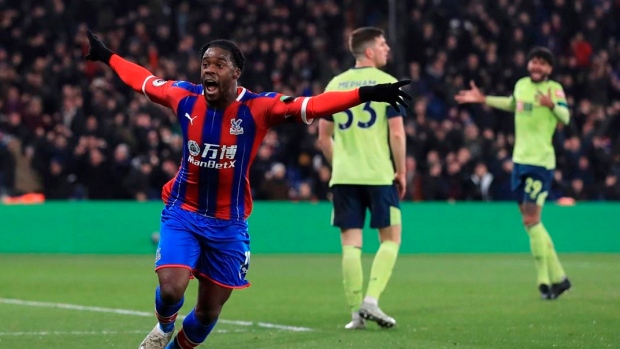 LONDON — Substitute Jeffrey Schlupp scored in the 76th minute as 10-man Crystal Palace beat Bournemouth 1-0 on Tuesday to provisionally move up to fifth in the Premier League.

Roy Hodgson's side played a man down for 71 minutes after Mamadou Sakho was sent off for a rash tackle, but Palace’s makeshift back four produced a solid display to see out a second straight win.

Bournemouth, meanwhile, has now lost four games in a row.

Sakho was making just his second league start of the season and recklessly caught Adam Smith high on the knee when sliding in for a tackle in the 19th minute, causing referee Anthony Taylor to show a straight red card.

Palace then had another setback when Patrick Van Aanholt sustained a hamstring injury and had to be replaced by Schlupp. That meant Palace had centre-back Martin Kelly playing on the right of the back four, midfielder Cheikhou Kouyate at the heart of defence and Schlupp — usually a winger — filling in at left-back.

However, Bournemouth struggled to create chances and the hosts were still a threat on counterattacks, with Wilfried Zaha having a penalty appeal waved away in the 70th minute after colliding with Chris Mepham.

Schlupp then scored the winner after he raced past Jefferson Lerma and Dominic Solanke before dribbling into the area and rifling an effort past Aaron Ramsdale from 12 yards out.