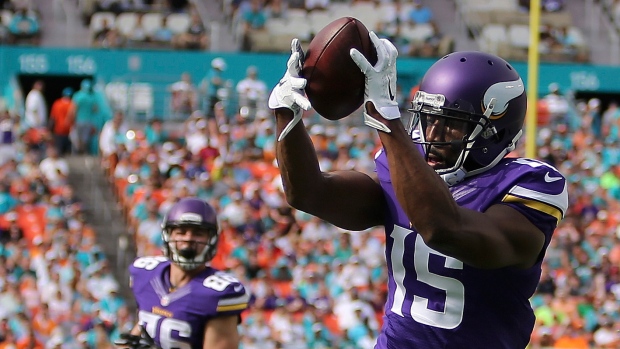 MIAMI - Greg Jennings has played in 10 post-season games, or 10 more than most of his new teammates with the Miami Dolphins, and he's eager to help lead them to some success in January.

"I've been fortunate to have a great career," Jennings said Thursday, "and it's going to get better now that I'm down in Miami."

The two-time Pro Bowl receiver signed an $8 million, two-year contract Wednesday with the Dolphins, and he'll fill a void among the wideouts by providing veteran leadership. The team's other top receivers are Jarvis Landry, 22, and newcomer Kenny Stills, 23.

Even after signing Jennings, the Dolphins might use the No. 14 pick in next week's draft on a receiver. His reaction if they do?

"My reaction would be, let's go," he said with a laugh. " I'm a part of what we're trying to get done, which is win ballgames. Whoever we draft, I think all of us, including me, will embrace him and try to move forward with the team goal."

Jennings, a nine-year veteran, led the Minnesota Vikings last season with 59 catches for 742 yards and six touchdowns. He has 63 regular-season touchdown receptions, and scored twice to help the Green Bay Packers beat the Pittsburgh Steelers in the 2011 Super Bowl.

"Greg brings a track record of success and is a proven player who can help strengthen the offence," general manager Dennis Hickey said in a statement.

In the past three years, however, Jennings has totalled only 14 touchdowns while averaging 11.7 yards per catch. How much does the 31-year-old receiver have left in the tank?

In Miami, he will be reunited with coach Joe Philbin, who was an assistant in Green Bay for six seasons that Jennings played there. Philbin was heavily involved in the recent courtship of Jennings, who considered other teams.

"Joe and I talked frequently, whether it be over the phone or via text," Jennings said. "I kept him up to date on the different visits and always was open and honest with him, as he has always been dating back to our time together in Green Bay. I can be upfront and forthright with him. That's not always the case when it comes to making decisions like this."