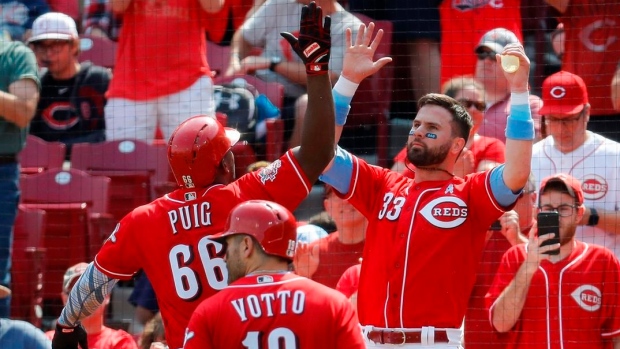 No worries — Joe Winker went to the airport with plenty to be proud of.

"It was really cool to have a good day on Father's Day," Winker said. "It was a cool weekend with my dad. We got to play some cards and smoke some cigars. It was funny. He had to be at the airport by five. He tried to stay for as many at-bats as he could."

The Reds broke open a one-run game with a four-run fourth. Winker followed pitcher Sonny Gray's leadoff triple with a homer, his 11th of the season and first in 21 games. Puig drove in Joey Votto with a shot off the batter's eye for his 13th homer on the first pitch he saw from reliever Pete Fairbanks.

"It was a big day for Wink," manager David Bell said. "The two-run home run was the big hit of the game."

Puig had three hits for the second time in three games.

Gray worked around Shin-Soo Choo's solo home run and Hunter Pence's two-run shot to finish five innings in a game that was delayed at the start by 1 hour, 34 minutes. Gray (3-5) gave up five hits and three runs with one walk and eight strikeouts. He improved to 3-1 with a 2.93 ERA over his last four starts.

Ariel Jurado, who won each of his previous three starts, lasted three batters into the fourth inning. Jurado (4-3) allowed nine hits, the most of any of his six starts this season, and seven runs with one walk and no strikeouts. He also hit a batter.

"Jurado left a lot of balls over the plate," Texas manager Chris Woodward said. "They were all over his changeup."

The Rangers went 4-3 on their road trip through Boston and Cincinnati.

Neither Puig in right field or Winker in centre moved more than a step on Choo's first-inning rocket into the right-centre field seats, Choo's 12th of the season.

Winker followed Jose Peraza's sacrifice fly, Peraza's first of the season, with a two-run double for a 3-1 Reds lead in the second. It was Winker's first RBIs since May 28.

"He's been hitting the ball hard," Bell said. "The results haven't been there."

Pence tied it with his drive into the visitors' bullpen in left-centre field in the third on a 3-0 fastball, Pence's 17th career homer against Cincinnati, tied for the second most against any opponent.

The Reds placed SS Jose Iglesias on the three-day paternity list and activated RHP Robert Stephenson from the 10-day injured list. Stephenson had been out since May 31 with a cervical strain.

Rangers outfielder Delino DeShields and his father, Reds first base coach Delino DeShields, presented their team's lineup cards to the umpires at the plate before the game. Father and son exchanged a handshake and hug.

Gray's triple was the first extra-base hit of his six-year career, the first five of which were spent in the American League. It was the first triple by a Cincinnati pitcher since 2015.

Mike Minor pinch-hit in the fifth, the third time a Rangers pitcher has pinch-hit in an interleague game and first since 2014.

The start of the game was delayed 1 hour, 34 minutes, by rain and ended in another downpour.

Rangers: OF Nomar Mazara did not start and was set to have an MRI on Monday after leaving Saturday's game with a tight right hamstring. ... RF Hunter Pence left the game with tightness in his right groin after chasing Peraza's ground-rule double down the right field line in the fifth.

Reds: OF Nick Senzel was not in Sunday's starting lineup, but he was available, manager David Bell said. Senzel needed three stitches to close a cut above his left eye, the result of a foul tip that bounced off his left foot and hit the bill of his batting helmet and his eye Saturday. ... IF Scooter Gennett will begin a rehab stint Monday with four or five days at Class A Daytona. He has been out all season with a right groin strain.

Rangers: RHP Lance Lynn (7-4, 4.40) is 2-0 with a 0.75 ERA in two career starts against Cleveland going into Monday's opener of a four-game series and seven-game Texas home stand.

Reds: RHP Luis Castillo (6-1, 2.20) is scheduled to make his first career appearance against Houston in Monday's opener of a three-game series in Cincinnati.