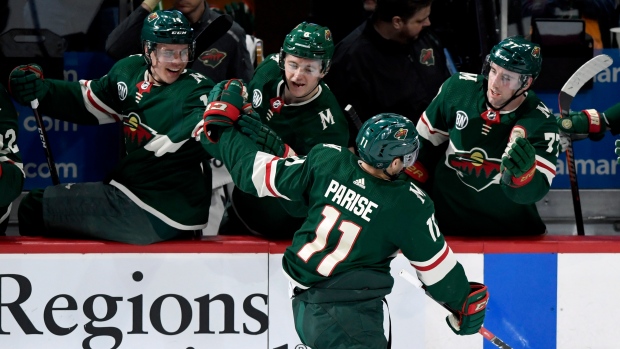 ST. PAUL, Minn. — Minnesota raced off to a big lead against Winnipeg on Tuesday, and then started watching the scoreboard to see if its faint playoff hopes would survive another night.

The Wild did their part, but their six-year playoff streak came to an end.

Zach Parise scored twice in his return from injury, Devan Dubnyk made 32 saves and the Wild rolled to a 5-1 win against the Jets.

Victor Rask, Joel Eriksson Ek and Marcus Foligno also scored for Minnesota, which entered play five points behind Colorado for eighth in the Western Conference. The Avalanche trailed 2-0 at home against Edmonton before rallying for a 6-2 win that knocked the Wild out of the playoff contention.

"It's tough," Foligno said before the Colorado game ended. "We played a really good game. I mean, too little, too late in the season in general. We had a lot of chances at home to play like this, and it catches up to you obviously. It's such a hard league and you never want your fate to be in someone else's hands or some other team's hands."

Jacob Trouba scored a short-handed goal for Winnipeg, but goaltender Eric Comrie surrendered three first-period goals in his first start of the season and fifth of his career. Comrie finished with 23 saves.

The Jets have lost four of five to slip into a tie with Nashville for the lead in the Central Division. The Predators won 3-2 in Buffalo on Tuesday night. Winnipeg and Nashville each have two games remaining.

The recent stretch led to a players-only meeting after the game.

"You want to get a team on the same page, you want to get every guy pulling on the rope in the same direction," Jets captain Blake Wheeler said. "Sometimes the best therapy for that is having a conversation about it."

Coach Paul Maurice said "it's always a good thing" that his players took the initiative for a meeting.

"We're not very proud right of our game right now and it's the style of the game that we're playing," Maurice said. "So, they recognized that clearly and thought it was a good time to have a chat about it."

Parise, who leads Minnesota with 28 goals, missed four games with a lower-body injury, and the Wild lost three times.

It didn't take long for Parise to show Minnesota what it missed.

Defenceman Greg Pateryn collected a loose puck behind the Jets' goal and centred to Parise in front. Parise got a stick on the puck while tied up with a defenceman and it went flying high into the air. Comrie lost track of the shot and it fell off his back and into the goal.

"Fluky, fluky goal, I guess, but at the time you'll take anything," Parise said.

Another fortunate bounce went Parise's way three minutes later when the puck slid toward the Winnipeg goal after he tipped it in from the blue line.

Minnesota's Eric Staal charged the puck but ended up skating over it while defended by Bryan Little. The puck slid to a streaking Parise, who beat Comrie at 12:16.

Rask scored from a wide angle with another deflection off Comrie's back before the first intermission. Eriksson Ek made it 4-0 midway through the second with his seventh goal of the season.

"That was three goals that shouldn't have gone in, I think, and haven't gone in in the past," Wild coach Bruce Boudreau said. "I think that helped. Ek's shot, I don't know if anyone would have stopped. But hey, you're not looking a gift horse in the mouth when you get a chance to score five."

NOTES: Winnipeg forward Brandon Tanev left with an upper-body injury. Tanev has played in all 80 games this season and has 14 goals and 15 assists. ... Parise had first multigoal game of the season. ... Minnesota won each of its five meetings with Winnipeg this season.

Jets: Play at Colorado on Thursday.