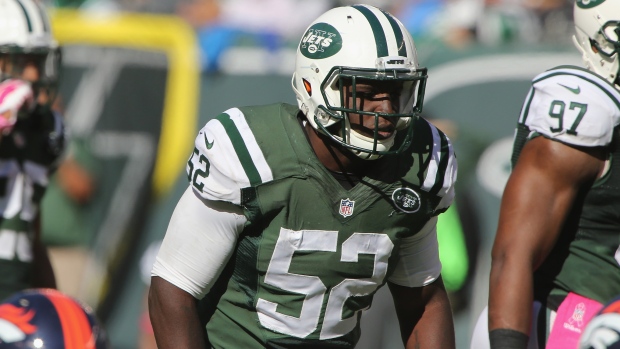 The team announced Friday that it re-signed the playmaking linebacker who has more than 1,000 tackles in eight seasons with the Jets.

A person familiar with the deal told The Associated Press that it is a three-year, $21.5 million contract — which includes $15 million guaranteed through the first two years. The person spoke on condition of anonymity because the team hadn't announced terms.

Harris, 31, has been a consistent leader on the Jets' defence since he was drafted in the second round out of Michigan in 2007. He has led the Jets in tackles in all but one of his seasons with the Jets — he missed five games in 2008 with an ankle injury — and relayed the signals for former coach Rex Ryan's defence.

Harris, nicknamed "The Hitman" by teammates, is expected to be a key part of the defence as a middle linebacker in new coach Todd Bowles' defence. He was likely going to be a highly sought free agent — particularly by Ryan's Bills or former defensive co-ordinator Mike Pettine's Browns — if he hadn't been re-signed by New York. Harris was scheduled to become an unrestricted free agent on Tuesday for the first time in his career, but elected to not test free agency as new general manager Mike Maccagnan made him an off-season priority.

Harris, in a statement posted on the team's website, said he "could not be happier" to continue his career with the Jets.

"After hearing the plans and vision of coach Bowles and Mike Maccagnan," Harris said, "there was no doubt I wanted to return, help win a Super Bowl with the Green & White, and retire a Jet."

Harris has also been a reliable presence for the Jets, having played in 100 consecutive regular-season games — the longest streak by an active NFL linebacker. While he has never been a Pro Bowl selection and shuns the spotlight, Harris is well-respected around the league.

Despite telling The Associated Press last season that he would like to finish his playing career with the Jets, he refused to speculate about his future.

"I try, in a way I guess, to show these guys that there's a different way to do things rather than being a guy who's starving for attention," he said at the time. "You go out there and do your job, do it at a high level, be respectable and carry yourself without needing the spotlight on you.

"Everything else is extra to me. I need that energy for other stuff."