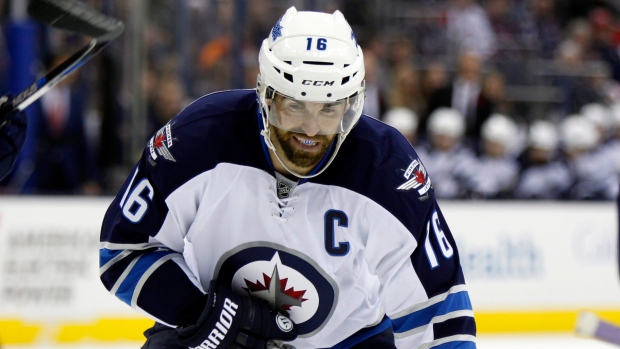 Andrew Ladd is returning to the Chicago Blackhawks.

The Winnipeg Jets have traded their captain to the team he won a Stanley Cup with in 2010.

"Chicago was at the top of my list, for sure," said Ladd in a conference call on Thursday night. "I'm excited to have the opportunity to go back there and have another chance to win a Stanley Cup again."

Ladd, along with Jay Harrison and Matt Fraser are headed to Chicago, while the Jets are receiving forward Marko Dano, a first-round pick this season and a conditional third-round pick in 2018. The Jets also retained 36 per cent of Ladd's remaining salary.

Ladd, who has been the Jets captain since the team relocated in 2011, has scored 17 goals and tallied 34 points in 59 games this season. He was a late scratch prior to the Jets' game with the Dallas Stars on Thursday night.

The 30-year-old is currently playing on an expiring contract and is set for free agency this summer.

The left winger, who has crossed the 20-goal mark in each of the past four non-lockout seasons, owns a cap hit of $4.4 million and is owed a salary of $4.5 million.

Ladd had been a member of the Jets franchise since joining the Atlanta Thrashers in 2010. Prior to that, he spent first five NHL seasons with the Carolina Hurricanes and the Blackhawks. Ladd also won a Stanley Cup with the Hurricances in 2006.

"The city was electric and we just had such a close-knit group of guys that it was an exciting time for everyone," said Ladd of the Jets. "Then the reality hit that not everyone's going to be sticking around. I think it was good for my career in terms of the situations and minutes that I played beyond that. I'm excited to come back and really show what my game's all about now."

Ladd says he knew his days with the Jets were numbered and that an extension wasn't forthcoming before the NHL trade deadline set for Monday.

"I think after Buff signed and we talked to (Jets general manager Kevin Cheveldayoff) that's when I got the sense that it probably wasn't going to happen," said Ladd. "Then you obviously start thinking and hoping that if (a trade) is going to happen you're going to go to a place that has a chance to win."

Ladd thanked Jets fans and the city of Winnipeg on Twitter.

Fraser and Harrison have not appeared for the Jets this season. Both have spent the entire season with the American Hockey League's Manitoba Moose.

Harrison, 33, is a veteran of 372 NHL games with the Toronto Maple Leafs, Carolina Hurricanes and the Jets.

Dano, 21, was taken with the 27th-overall pick in the 2013 NHL Entry Draft by the Columbus Blue Jackets. He was dealt to the Blackhawks in the offseason as part of the Brandon Saad trade.

The native of Eisenstadt, Austria has appeared in 13 games for the Blackhawks this season, recording a goal and an assist. He has spent the majority of the season with the Rockford Ice Hogs of the American Hockey League.

"From our standpoint, obviously, we got a young prospect in Marko Dano that has skill. He competes hard," said Cheveldayoff. "He's a young player that fits the direction that we want to go. He goes to the hard areas. He can play up and down the lineup."

The 2018 third-round pick is contingent on the Blackhawks winning the Stanley Cup this June. If they do not win the Cup, there will be no pick.