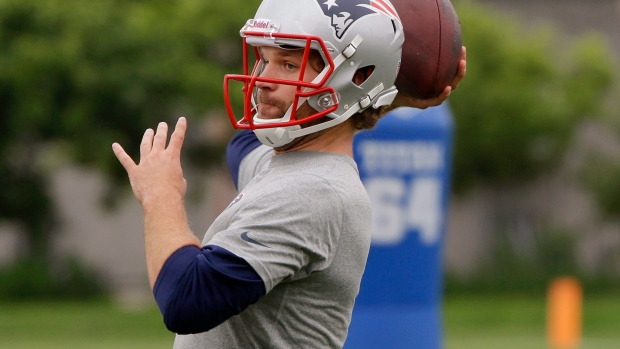 FLORHAM PARK, N.J. - Matt Flynn has been a well-travelled quarterback during an NFL career that has taken him all over the country.

Next stop: the New York Jets.

"Yeah, sometimes I have to look at the map app on the phone to figure it out," Flynn joked Wednesday when asked if he ever gets confused as to where he is.

The Jets signed Flynn to a one-year deal, bringing in the veteran quarterback to back up Ryan Fitzpatrick, who's now the starter with Geno Smith sidelined six to 10 weeks with a broken jaw.

New York is the seventh NFL stop for the 30-year-old Flynn, who has also been with Green Bay (twice), Seattle, Oakland, Buffalo and New England.

"I'm happy to be here," said Flynn, his hair pulled back and in a man bun. "I'm happy for the opportunity, and now I'm just trying to get acclimated. It's kind of been a whirlwind the last couple of days."

To make room on the roster, the Jets waived wide receiver Arthur Williams.

Flynn entered training camp with the Patriots, but was cut last week while dealing with a lingering hamstring injury. Coach Todd Bowles said Flynn is about a week away from fully practicing, which means he won't play in the Jets' preseason game against the Atlanta Falcons on Friday night. Flynn participated in positional drills Wednesday, but did not take part in team drills.

Flynn will get a chance to learn the playbook as he continues to rehabilitate the injury and potentially be ready to play in the third preseason game against the Giants.

"Specifically, there wasn't any talk about what a role is, what they want out of me right now," Flynn said. "My focus has to be learning stuff — learning the playbook, learning what the heck is going on. Watching practice today, it was different. I didn't know a lot of what was going on."

Flynn took a physical with the Jets last Friday, but didn't work out for the team. Because of his experience and familiarity with the type of offence system Chan Gailey runs, the Jets decided to bring Flynn in now rather than when he becomes 100 per cent healthy because there's a chance another team could have tried to sign him.

"He's been around a few places," Bowles said. "He kind of knows the system a little bit. He was the only one available, too."

By that, Bowles meant an experienced quarterback on the free-agent market who could quickly grasp the system the Jets are running.

The move came a day after general manager Mike Maccagnan said the team would look into acquiring a veteran to back up Fitzpatrick. Smith was injured last week when then-teammate Ikemefuna Enemkpali punched him in the locker room.

Smith is likely to be sidelined at least the first four games of the regular season, so it's Fitzpatrick's job now to lose. The only other quarterbacks on the roster, though, were fourth-round draft pick Bryce Petty and undrafted free agent Jake Heaps.

Flynn has 17 TD passes in his career, with six of them coming in one game in which he also threw for 480 yards — both Packers records — in Green Bay's 45-41 victory over Detroit on Jan. 1, 2012. While he's here now, Flynn was given no guarantees to make the Week 1 roster — and Bowles acknowledged that it's "conceivable" that the Jets could look elsewhere this preseason, depending on Flynn's progress.

"Terminology-wise, there's some similarities to some of the other offences I've seen and been accustomed to," Flynn said. "So, hopefully there's a quick learning curve."