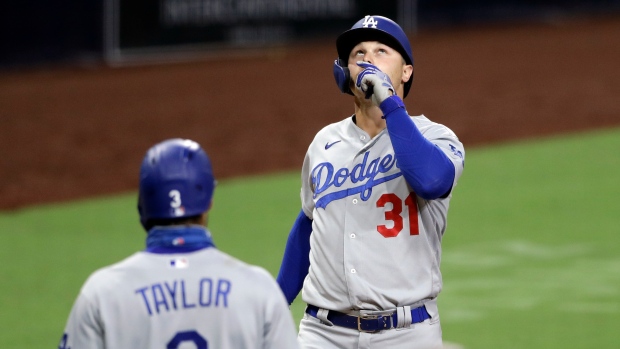 SAN DIEGO — Joc Pederson’s second home run of the game sailed an estimated 435 feet through two palm trees just beyond the centre field fence at Petco Park, and the Los Angeles Dodgers held off the San Diego Padres 7-6 Wednesday night to take two of three in an early series between NL West rivals.

Pederson drove in five runs on the two homers for the seven-time defending division champion Dodgers, who won seven of nine on their longest trip of the season, through Houston, Arizona and San Diego.

Kenley Jansen made it interesting in the ninth inning by allowing one run before the game ended on a double play. With runners at the corners, Manny Machado lined out to left fielder Chris Taylor, who threw out Trent Grisham trying to score the tying run. The Padres challenged but the play stood after review. Jansen earned his fourth save in as many chances.

“Fortunately my momentum was already taking me in and I just tried to get rid of it as quick as I could and give Will (Smith) an easy one hop,” Taylor said.

“That was an exciting series," he added. "Just to get a series win against that team, it was back and forth and hard-fought. They've got a lot of talented players, young players. I think they're trying to make a statement. It was a big win, to be able to do it in that fashion tonight.”

Said Padres rookie manager Jayce Tingler: "Manny squared the ball up and they made a heck of a play. Perfect throw and tag.”

Pederson hit a two-run homer off Garrett Richards (0-1) in the second and then welcomed rookie Luis Patiño to the majors with his monster three-run drive in the sixth for a 7-2 lead. Pederson has three homers. His first was a leadoff shot in a 5-4 loss in the series opener Monday night.

The hard-throwing Patiño, San Diego’s No. 2 prospect, made his big league debut in the sixth. He retired NL MVP Cody Bellinger on a fly to centre before getting into trouble. Corey Seager and Taylor singled before Pederson connected on a 97 mph fastball on a 1-2 count.

“The report was he was throwing the ball really hard, so I was just trying to get the barrel to the ball and I hit it pretty good,” Pederson said.

Tingler said the Padres “were looking for a soft landing" for Patiño, "but there are no soft landings in the NL West. Pederson clipped a couple of balls tonight.”

The Padres have lost four of five. They feel they’re built to compete in the pandemic-shortened season, even if they have to settle for a wild-card berth. They haven’t been to the playoffs since winning consecutive NL West titles in 2005-06, and haven’t had a winning season since 2010.

“They fought back," Taylor said. "You’ve got to give them credit. Every time we stretched the lead they got a big inning and answered, all the way down to the last out. It felt almost like a playoff game. I expect that’s the type of team we’ll see come post-season.”

The Dodgers added on in the fifth on Smith’s RBI single and Enrique Hernandez’s RBI double.

Fernando Tatis Jr. hit a two-run homer off Ross Stripling (3-0) with two outs in the fifth, his fourth. Wil Myers hit a solo shot off Caleb Ferguson in the eighth, his fourth.

Tingler was ejected for the first time while arguing with plate umpire Mark Ripperger over a called strike against Machado in the seventh.

Machado struggled in the series, going 1 for 11 with two walks and three strikeouts.

Dodgers: OF Mookie Betts missed his third straight start with an injured finger but played right field in the ninth. With the team off Thursday, manager Dave Roberts hopes Betts can play Friday night at home. Betts came into Tuesday night’s game as a defensive replacement.

Dodgers: After an off day, the Dodgers open a three-game home series against San Francisco on Friday night. LHP Julio Urías (1-0, 2.45) is scheduled to start.

Padres: After an off day, the Padres continue their homestand with a three-game series against Arizona beginning Friday night. RHP Zach Davies (1-1, 4.50 ERA) is scheduled to start for the Padres.