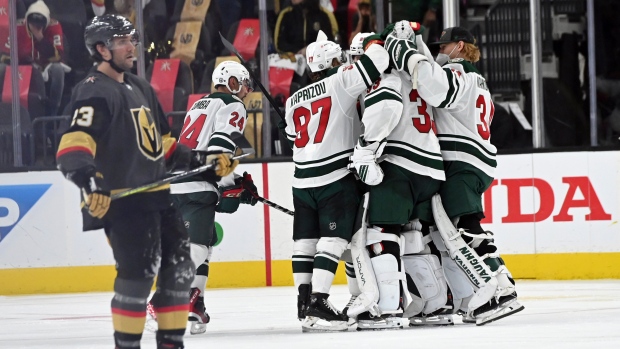 LAS VEGAS (AP) — Joel Eriksson Ek’s goal at 3:20 of overtime lifted the Minnesota Wild past the Vegas Golden Knights 1-0 in Game 1 of their first-round series on Sunday.

Vegas’ Marc-Andre Fleury, the first goalie in NHL history to play in 15 consecutive postseasons, made 29 saves.

After Vegas defenseman Alex Pietrangelo failed to clear the puck, Eriksson Ek was in the slot to send a shot that went off the skate of Golden Knights defender Alec Martinez and past Fleury.

Between hitting, skating, a torrid pace, spectacular goaltending — regulation had everything but scoring.

With 8,683 frenzied fans in attendance to create the loudest atmosphere of the season, an intense first period saw the Golden Knights outshoot the Wild 19-5 and both teams staying aggressive on the forecheck and in the hitting department. Minnesota outhit Vegas 25-23 in the opening period. Talbot got some help from his skaters, too, as they registered 11 blocked shots to help keep the game scoreless.

After falling short in overall shot attempts in the first period — Vegas had a total of 38 to Minnesota’s nine — the Wild flipped the script and did a much better job of turning pucks over, creating breakouts and getting better looks while keeping the Knights locked in their own zone. Fleury was busy in making some of his trademark glove-flashing windmill saves.

Though the Golden Knights were up 30-18 in shots after the second period, the three best saves to that point were by Fleury, who carried his momentum into the third period with several more saves, mostly against Ryan Hartman, who finished with several high-quality scoring chances.