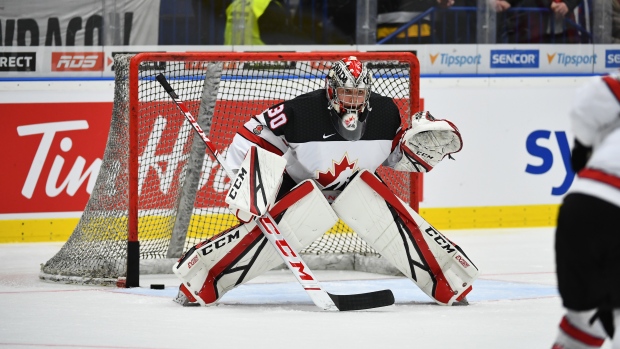 OSTRAVA, Czech Republic — All signs point to Joel Hofer getting his second start in as many days as Team Canada closes out the preliminary round at the World Junior Championship.

Hofer rested on Tuesday morning ahead of Team Canada’s final medal round tune-up against the host Czech Republic (12:30 p.m. ET/9:30 a.m. PT on TSN 1/4/5), while goaltenders Nico Daws and Olivier Rodrigue got in extra work at the morning skate.

The Czech Republic, who will be without star forward Jan Jenik for the remainder of the tournament, could be fighting to avoid the relegation round on home soil.

Assistant coach Andre Tourigny said Team Canada was still waiting to make its “final decision” on a starter, but it has been team policy not to name one pre-game.

“He was really solid,” Tourigny said of Hofer’s first start on the international stage on Monday. “We won 4-1, but at some point in the game, we needed our goalie to make key saves and he did.”

Hofer, 19, was Team Canada’s stabilizing force in the rebound against Germany.

Hofer has the second-best goals-against average (1.84) in the tournament.

“He was steady,” Ty Dellandrea said Tuesday morning. “What was great for us in the D-zone is he’s always putting rebounds into the mesh or into the corner so the way he controls his rebounds really helps us out in the defensive zone.

Lafreniere, 18, injured his left knee on Saturday against Russia. There is no change in his status and he will not play against the Czechs.

Lafreniere’s availability for the tournament remains up in the air as his group seeks a second opinion from doctors about potential further damage to his knee if he were to return.

CASE FOR THE DEFENCE: One thing missing from Team Canada’s first two games of the tournament was offense from the blue line. Canada had generated just one assist by a defenceman.

That changed in a big way on Monday, with the defence accounting for four points in the 4-1 win over Germany.

“I think it was important,” defenceman Ty Smith said Tuesday. “It’s good, the more guys that are chipping in, the more dangerous that makes the team.”

Not surprisingly, Canada’s defence activated more in the play in the offensive zone as the team’s puck possession increased. There was a noticeable change in puck possession, to be expected as the quality and depth of the opponent dropped off to Germany, from facing the United States and Russia in the first two contests.

“Yesterday they did a way better job to defend, to get on the right side of the puck, to reload quickly that allowed our ‘D’ to be more involved offensively,” said Tourigny, who coaches the defence.