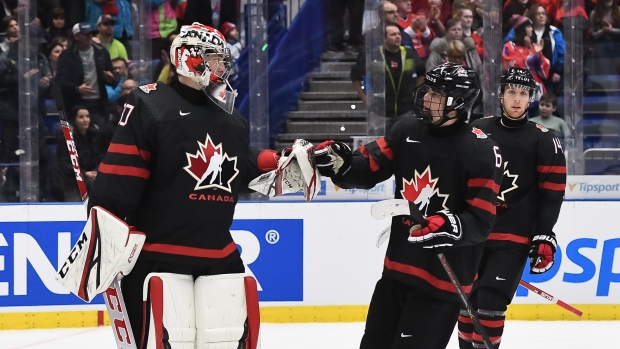 OSTRAVA, Czech Republic — The chant grew louder inside Ostravar Arena as the seconds salted away in Canada’s semifinal win on Saturday.

An ocean away from home, more than 3,000 red-clad fans were serenading Team Canada goaltender Joel Hofer on his night of perfection.

“It gave us chills when they were chanting that to end the game there,” teammate Ty Dellandrea said.

Dellandrea wasn’t alone. Hofer was in his net soaking it all in, imagining what it might be like to see a pile of gloves and sticks in front of him as Canada celebrates. He will be the man for Team Canada when they take on Russia for World Junior supremacy in the gold medal game on Sunday (noon ET on TSN 1/3/4/5).

“It’s definitely pretty surreal,” Hofer said. “It’s every kid’s dream to be on this stage, all of us as kids watched this tournament growing up. It’s a pretty special feeling.”

Team Canada has undeniably grown in the eight days since Russia handed them the country’s most lopsided loss in the 43-year history of the World Juniors. They’ve faced every piece of adversity thrown their way head-on.

But Hofer has been the biggest difference from Dec. 28 until now. He took over in the second period against Russia for Nico Daws and hasn’t looked back.

In four starts, Hofer has allowed a total of four goals, including a shutout on Saturday against the defending champion Finns. Russia will be his biggest challenge, but he's more than earned the chance.​

“He’s been phenomenal,” Joe Veleno said. “I never really heard of this guy [Hofer] before. He stepped in and he’s been incredible. I think he’s led the way on the backend, he’s kept us in key situations, and led us in really big ways.”

Only those plugged into the Western Hockey League had known about Hofer before Canada’s selection camp began one month ago in Oakville, Ont.

Hofer, 19, was not invited to Canada’s World Junior Summer Showcase. He was never part of Hockey Canada’s program of excellence at any age level. That action against Russia in Game 2 of the preliminary round was his first on the international stage.

“It’s pretty crazy,” Hofer said. “I wasn’t invited to the showcase or anything and was off the radar for a bit. So I kind of just went about my business, game by game, and it’s been showing off.”

That confidence on display is exactly what Hofer’s billet parent in Portland, NHL referee Ian Walsh, predicted before the tournament began.

“I think his mentality and mental strength could really be a big asset for him in a tournament like this one,” Walsh said. “He is quiet, but he is confident. He has a calm presence.”

His teammates have echoed that: “He’s been unbelievable,” Dellandrea said. “He’s calm and he controls the rebounds really well, so that makes us feel confident all game.”

The Winnipeg, Man., kid has stolen the show in a tournament that was supposed to be headlined by Florida Panthers first-round pick Spencer Knight (USA) and projected first-round pick Yaroslav Askarov (Russia).

It’s Russia’s goaltending that is in-flux heading into the final, not Canada’s - as it was when they first faced off on Dec. 28. Askarov started in the semifinal against Sweden on Saturday and was pulled after allowing the fourth goal in favour of Amir Miftakhov.

Now, Hofer is a safe bet to be named the top goaltender at the World Juniors with his sparkling .946 save percentage. That is the common thread in Canada’s overseas gold medal runs - all eight times Canada has won gold in Europe, their goaltender was named the top netminder.

Hofer admitted he will be nervous on Sunday.

“How can you not have nerves? I mean, it’s the World Championship,” Hofer said. “Everyone has nerves and you just have to accept them. It’s just a feeling. It’s good.”

As a St. Louis Blues prospect, Hofer is trying to channel his best Jordan Binnington, who famously said last season: “Do I look nervous?”

“He’s kind of calm and poised like me,” Hofer said. “He’s a pretty special goaltender and after the run last year, he’s continued to do it this year. He’s really consistent and someone that I look up to.”

Hofer said he introduced himself to Binnington last September at the Blues’ training camp and they got talking.

There are parallels between Binnington and Hofer. Both are late-round picks - Binnington in the third round (88th overall), Hofer in the fourth (107th overall). Both have represented Canada at the World Juniors.

Both have come from off the radar and all they’ve done is win. They called him ‘Winnington’ for his record (43-12-5 in the NHL) and Hofer is undefeated (4-0) for Team Canada.

Now Hofer is hoping to follow in Binnington’s footsteps in a pressure-packed, one game, winner-take-all.

“I hope so. I mean, he’s obviously a little bit higher than me with the Stanley Cup,” Hofer said, pausing to smile and think about the moment. “But World Juniors would be pretty cool.”