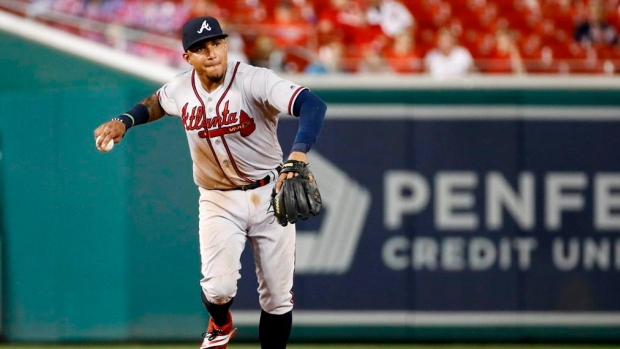 ATLANTA — Johan Camargo has a second chance to be the Atlanta Braves' starting third baseman.

Camargo's renewed motivation to make the most of this opportunity comes after hard lessons learned in a demotion to the minors last season. His commitment shows with a renewed commitment to conditioning this off-season that has impressed his manager, Brian Snitker, and his teammates.

“I want to be back, that's why,” Camargo said Saturday at the team's fan event at the newly renamed Truist Park.

The Braves are looking for a new starter at third base after failing to re-sign Josh Donaldson, who landed a four-year deal with Minnesota.

“He was great,” first baseman Freddie Freeman said Saturday. “I don't know how much more you can ask for.”

Freeman added Camargo “got put in a tough position last year” after Atlanta signed Donaldson to a one-year deal.

With Donaldson a fixture at third base, Camargo shifted to a utility role. He struggled, hitting only .233. He was hitting only .222 when demoted to Triple-A Gwinnett in August. He finished with a strong final month in Atlanta.

“I just hope he comes in where he left off, which was really good coming off Triple A,” Snitker said.

Camargo has lost about 15 pounds this off-season, when his workout regime in Tampa caught Snitker's attention, especially when he saw video of the infielder “swinging that mallet against the big tire or whatever.”

There were concerns Camargo's attempt to gain strength before the 2019 season hurt his defence. Camargo acknowledged Saturday the switch to a utility role contributed to his struggles. He said he's confident about his chances to win the starting job this spring.

“I just prepare myself like I just want to be healthy,” he said. “To be honest, I know what I can do. I've done that before. I've just got confidence in me.”

Camargo said he's still working on his strength but also has stressed renewed speed and quickness this off-season. He looks more like the player who spent much of his time at shortstop at the start of his career.

Camargo, from Panama, also worked on mastering the English language. He spoke with reporters without assistance from a translator. He proudly noted his work on the language was “by myself.”

Then all the compliments about Riley's swing, maturity and approach at the plate disappeared as his batting average plummeted and his power disappeared.

He hit only .161 with two homers after the All-Star break. He was left off the team's post-season roster due to his struggles against breaking balls. He has focused on that weakness this off-season.

“I knew the failures were going to be there,” Riley said. “They were longer than what I wanted. I know what I can do up here. That's important mentally. ... I'm very pleased with where my swing is now compared to where it was at the end of last season.”

NOTES: Freeman said he is pain-free following surgery in October on his right elbow. He said the surgery removed two bone spurs and loose fragments in the elbow which became especially painful late in the season and during the Braves NL division series loss to St. Louis. “It's the first time in nine years I haven't had pain in the off-season,” he said.