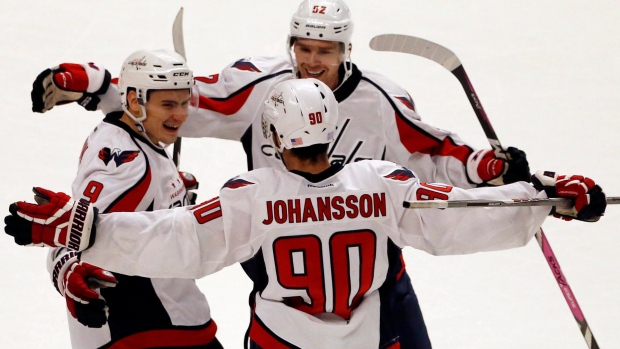 NEWARK, N.J. — After winning Presidents' Trophy and losing in the second round of the Eastern Conference playoffs two years in a row, Marcus Johansson knew the Washington Capitals were going to make changes.

Coming off a career-best season, the 26-year-old Swede just didn't think he would be one the guys leaving Washington.

After being surprised Sunday by a deal that sent him to the New Jersey Devils for two 2018 draft picks, Johansson said Friday he's looking forward to the chance to play for a rebuilding franchise that finished last in the conference this past season.

Johansson was asleep when the trade was made, admitting it took him time to come to grips with it.

"I was still half asleep when I saw it. At first you are in shock, and you have to try to figure out what is going on," he said in a conference call from Sweden. "You try to go through all the texts and everything to see what is happening."

That made Johansson expendable and the deal was made.

"I didn't get the sense that I would be moved. But you never know what is going to happen and there were a lot of guys that had to be- re-signed," Johansson said.

Once the shock wore off, Johansson got down to basics. He started thinking about selling his home and moving his family.

"As soon as it sunk in, you see all the positives, all the chances and opportunities to go somewhere else and create new memories for the family and new hockey memories as well, and be a part of something that I think is moving in the right direction," he said.

The Devils are not the Capitals. Washington has made the playoffs nine of the past 10 seasons, missing only in 2014. New Jersey has missed the playoffs the past five seasons, and they are coming off a 28-40-14 record, their worst in nearly three decades.

"I don't mind sort of being an underdog," Johansson said. "I think we have a great team and if we can put all the pieces together, I think we should surprise a lot of people. I am looking forward to that."

Johansson had 24 goals and 34 assists last season, with his goal total and 58 points career highs. His up-tempo game fits into the style coach John Hynes is trying to establish.

Johansson can play any of the forward positions. He was a left side last season.

Johansson doesn't know his new teammates, other than seeing them on the ice. New Jersey will have first overall draft pick Nico Hischier and it has three top forwards in Taylor Hall, Adam Henrique and Kyle Palmieri.

Looking back on his time with the Capitals, Johansson said the team's biggest problem was not winning the big games. They were beaten 2-0 at home in Game 7 of the conference semifinals by the now two-time defending champion Pittsburgh Penguins.

"We didn't play very well in it and didn't give ourselves a chance in it, where Pittsburgh maybe played their best game," Johansson said. "That's what it comes down to, you have to play your best game when it is needed the most, and we didn't."