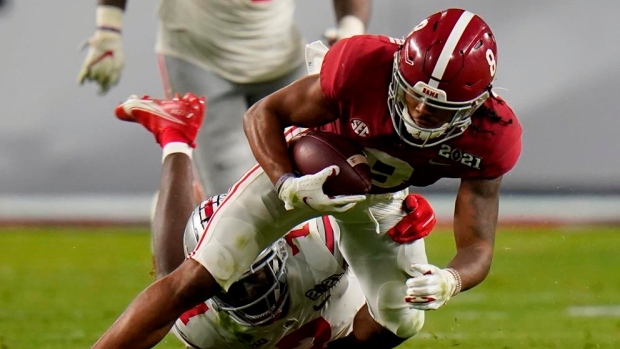 In his final season in Tuscaloosa, Metchie - the No. 1-ranked prospect - recorded a team-high 96 receptions for 1,142 yards and eight touchdowns. His 96 receptions were the third-most in Crimson Tide single-season history, propelling him to the program’s 13th 1,000-receiving yard season. He finished his collegiate career with 155 catches, 2,081 receiving yards and 14 majors. In 2020, Metchie won the CFP National Championship and claimed the Jon Cornish Trophy as the top Canadian in the NCAA.

Ford, the highest-ranked U SPORTS athlete at No. 4 overall, is a two-time OUA conference most valuable player finishing the past season in the top 10 of both passing and rushing in Canada.

This past season, he passed for 1,465 yards and added 629 yards on the ground in six games, en route to claiming the Hec Crighton Trophy. Ford finished his collegiate career with 71 touchdowns (56 passing and 15 rushing), while notching more than 7,000-passing yards. At the CFL Combine, he led all prospects with a time of 6.85 seconds in the three-cone drill and also clocked a 4.45-second 40-yard dash at the University of Buffalo’s pro day.

Rounding out the Top 5 are linebacker Jesse Luketa of Penn State (No. 2), Syracuse linebacker Tyrell Richards (No. 3) and wide receiver Jalen Philpot from the University of Calgary.

Last season, the Recreation and Leisure student completed 118 of 186 passes (63.4%), throwing for 1465 yards and 10 touchdowns. Averaging 244 yards per game in the air, he also finished fourth in Canada in rushing with 629 yards in six contests while scampering for three more scores. He led all U SPORTS rushers averaging 10.7 yards per carry in the 2021 season.

The 2022 CFL Draft is scheduled for Tuesday, May 3. The first two rounds can be seen live on TSN, the TSN App and TSN Direct at 8pm et, with exclusive coverage of Rounds 3-8 on TSN.ca and the TSN app.