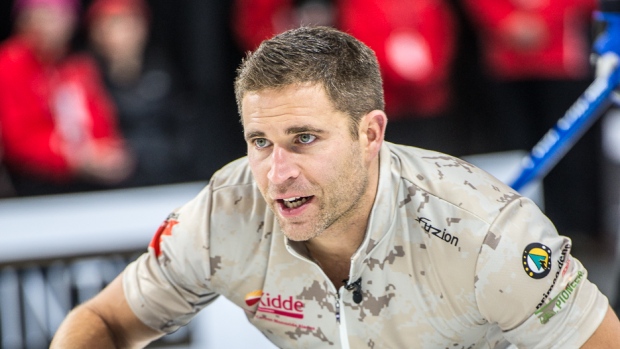 Veteran curler John Morris will return to the upcoming Tim Hortons Brier to serve as a fifth for Ontario skip John Epping.

Morris, who won Olympic men's team gold with Kevin Martin in 2010, has focused on mixed doubles over the last few seasons. He teamed with Kaitlyn Lawes to win gold at the 2018 Winter Games.

It will be the first time in his career that the 41-year-old Morris will be a team alternate. He'll join Epping and teammates Ryan Fry, Mat Camm and Brent Laing at the Feb. 28-March 8 Brier in Kingston, Ont.

"These are good friends of mine," Morris said Wednesday. "I know that it would mean a lot for them to win this Brier. If I can help them in any way whatsoever to help with that, I'd be more than happy to do that."

At major championships, teams often bring on a fifth to help with a variety of duties.

Rock matching, handling equipment, scouting and helping at practice sessions are all on the list. A team alternate also helps manage off-ice distractions.

"There's quite a bit to the role," Morris said. "They have a lot of great things going on. But for the most part, I'm just going to be a cheerleader and cheer them on as much as I can and help out when they need it."

The fifth would also step in if a team member is unable to play due to illness or injury.

"It's a new role for me and I always love a new challenge," Morris said. "And how can you not love going to a Brier in Kingston."

Epping is enjoying a strong 2019-20 season. The Canada Cup champions are ranked second in the domestic and international rankings.

They qualified for the Brier by defeating Glenn Howard in the Ontario final last weekend.

"I'm really looking forward to joining up with them," Morris said. "I think they've got a great chance. They've still got something to prove this season and they're a pretty motivated team so that's always fun to be a part of."

Morris has also won junior, national and world titles over his career. He scaled back his curling schedule a few years ago and has been able to spend more time with family.

The married father of two young children also works as a firefighter outside of Calgary.

"We are thrilled to announce our good friend John Morris as our super 5th man at the #2020Brier," Team Epping said in a post on Twitter. "Welcome to the team Johnny Mo!"

Morris won the mixed doubles Olympic trials with Rachel Homan, but Lawes filled in as Homan's four-player team qualified in the women's competition.

Homan still plays semi-regularly with Morris, who turns to spares at times throughout the season.

Morris has history with Team Epping. He played almost 10 years with Laing early in his career and Morris's father, Earle, used to play against Fry's father, Barry, back in the day.

"I remember hearing stories of how we were both in cribs together at curling events when our dads were playing," Morris said from Canmore, Alta. "We just have a long history of good friendship."

Morris likes the team-first mentality exhibited by the Epping crew, noting how Camm and Laing agreed to switch positions when Fry came on board at third last year.

Morris said it reminded him of how former teammate Marc Kennedy played second on the powerhouse Martin rink that was victorious at the Vancouver Games.

"I think it's really paying off with some great dividends. Now that team can roll with the best and they're proving that."

This report by The Canadian Press was first published Feb. 5, 2020.