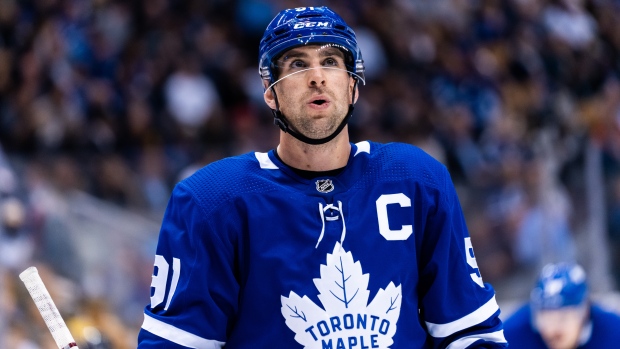 TORONTO – The Maple Leafs ended October losing four of their past five games, but reinforcements could be on the way, as top centre John Tavares returned to practice on Wednesday for the first time since injuring his finger two weeks ago.

“It’s definitely progressing. I wouldn't say it’s exactly normal, but definitely getting closer and getting better,” Tavares said after Wednesday’s session. “The progress has been good and I’m happy I’m in this position now where you start to see the light at the end of the tunnel and can get to a point where I feel good playing and then also know that it's at a pretty low risk of [being made] worse.”

After starting the season with a heavy schedule of games, the Leafs will use this rare three-day stretch off before their next game in Philadelphia on Saturday to assess whether their captain is ready to go.

It’s been exactly 14 days since Tavares’ right index finger was broken by an errant shot from Morgan Rielly in the third period of Toronto’s 4-3 loss to Washington. Tavares stayed in the game, even scoring on a late power-play chance to bring the Leafs within a goal. The next afternoon the Maple Leafs announced Tavares would be out a minimum of two weeks. He’s been skating daily during his absence and started shooting pucks again on Monday.

While the finger isn’t in perfect shape, Tavares is hopeful he won’t be sidelined for much longer. With a full practice under his belt, he’ll have to wait until Friday to know for sure that suiting up on Saturday is possible.

“I’m still trying to get through certain hurdles and see how I respond," Tavares said. “And also get a sense from some imaging on how the healing is going. It’s not so much the stiffness [of it]. I've actually had really good range of motion and mobility there. It's just gaining its strength back, mostly.”

Tavares also said he’s worked with the Leafs equipment staff to make adjustments that will minimize the chance of getting hurt again, adding extra padding to his glove and different stitching around his fingers.

“I have it protected pretty well, so shooting is pretty good,” he explained. “A lot of the competitiveness and getting in tight, creating space, pushing off guys, being along the boards – those are going to be the final hurdles that I’ll have to feel comfortable with.”

Head coach Mike Babcock is staying far away from the medical side of Tavares’ recovery until he gets the all clear, but still slotted him back in his usual spot on a line with Mitch Marner and Trevor Moore at practice on Wednesday.

“I can’t tell you when he’s playing. I just know we’re doing everything, and he’s doing everything, to be ready when he gets his opportunity,” Babcock said. “The doctors will check that out and decide when he’s available. I just tried [today] to put him in a situation that looked familiar, that might be something that he would see if he played.”

Tavares was just starting to find his rhythm this season when he went down, producing three goals and four points over his last four games to give him seven points (three goals, four assists) total in eight contests.

The Leafs have a 2-2-2 record without Tavares so far, but they've perhaps most especially missed his presence on the top power-play unit. When Auston Matthews finally scored during a third-period man advantage in Tuesday's game, it was the first time that group had scored since Tavares’ third-period marker on Oct. 22.

“Our power play hasn't been too great recently,” said Marner. “I think puck movement is mainly [the issue] and not getting it to the net, but [Tavares is] obviously going to help – coming back, with his instincts around the net, how hungry he is to score goals."

Looking at the season as a whole, Tavares can see that Toronto is still struggling to manage a full 60-minute effort.

“We’ve had some really good spurts,” admitted Tavares. “We just have made mistakes at some tough points and then don’t end up getting the result. And I don't think that's just since I’ve been out, that’s kind of been the case since the start of the season. We haven’t really been able to gain some momentum from that.”

Others around the NHL have noticed Toronto’s inconsistencies as well, and prior to Tuesday’s 4-3 overtime loss against Washington, Alex Ovechkin said that the Leafs, “Are still a young group of guys, and I hope they’re going to learn, but it’s up to them how they want to do it, and if they want to play for yourself, or if they want to win a Cup. They have to play differently. It’s no doubt.”

Tavares believes Ovechkin was just speaking from his own experience in overcoming adversity before finally winning a championship with Washington in 2018. He also believes his team can grow from the challenges they’re facing early this season.

“It's just continuing to figure things out and go through those tough times and adversity and understand the adjustments you have to make constantly,” Tavares said. “[That’s] as a team [and] individually, and continuing to be open to growth and to be challenged. I know we certainly have that here in this locker room. Continue to dig in, work as hard as we can, find ways to get better and continue to raise our standard.”