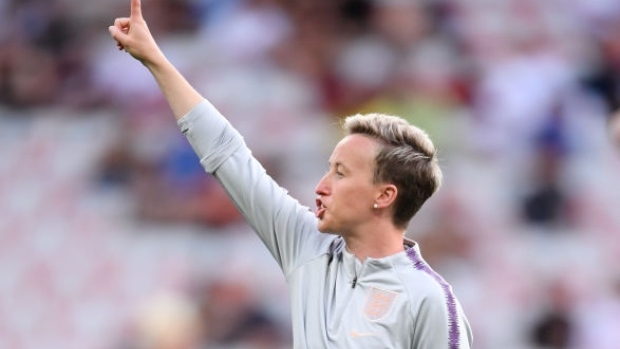 There will be several new faces when the Canadian women’s soccer team participates in its first camp in almost a year next month.

Canadian head coach Bev Priestman named her roster Monday for the two-week preparation camp, which is being held in advance of the SheBelieves Cup. The camp will kick off Feb. 6 in Orlando, while the tournament begins on Feb. 18 in the same city.

Teenager Jade Rose is also awaiting her first cap with the senior team, but she has been invited to several camps before under former head coach Kenneth Heiner-Møller.

“I already get a sense of real hunger, desire, excitement for the group to get back together,” said Priestman. “For Canadians back home, it’s a chance to see there’s hope in the world that we’re living in… On that grass, it’s about the group connecting again.”

Canada’s opening match is on Feb. 18 against the United States, the top team in the world. Brazil and Japan, two other top-10 teams, will also take part in the four-team tournament.

Canada, ranked eighth in the world, is also gearing up for this summer’s postponed Olympics. All four teams in the SheBelieves Cup will be at the Tokyo Games.

“We have two bronze medals around our neck, and our ultimate goal is to change the colour of the medal,” said Priestman. “Getting a win against tier-one opposition is something we need to move back towards. To test ourselves against some big hitters is where we need to be for an Olympic Games.”

This will be Priestman’s first camp as Canada’s head coach. She was hired last fall after the departure of Heiner-Møller.

This will also be Canada’s first camp in almost a year. The last time they were together as a team was in March 2020 at the Tournoi de France.

“It’s more of an excitement than nervousness. This group of players, I haven’t seen them for some time.  Any coach coming in having not seen them for a year, there’s that anticipation,” said Priestman. “COVID can’t be an excuse for this group… The games against top tier nations, for me that’s the gap and that’s what we need to address.”

Priestman was formerly the head coach of Canada’s under-17 and under-20 teams and has worked with several of the new players.

“I’m excited to see what the new faces bring.  I’ve definitely picked up a tendency of hunger, desire, hard work from the new faces coming in,” said Priestman.  “For any winning team, you have to have that competition for places.

“Any player that’s getting exposure in [their] first camp has absolutely nothing to lose.  Do I expect those five/six players to be on the Olympic roster?  Maybe not, but who knows.  They may absolutely prove me wrong.  They can certainly be knocking on the door… they’ve been brought in for a reason.”

Let’s take a closer look at the five women who have earned their first call-ups.

Viens might be the player Canadian fans are most excited about getting her first national team call-up. Currently playing with Paris FC in France’s top division while on loan from Sky Blue FC in the NWSL, Viens has eight goals in 12 matches, tied for sixth in league scoring.

“She finds the back of the net really well.  I think that stood out to me more than anything,” said Priestman.  “Her conversion rate has been really high in professional environments.”

Viens has been making heads turn since her collegiate career with the University of South Florida. She led the Bulls in scoring for four straight years, tallying 73 goals in 77 games, an American Athletic Conference record. In her senior year, she broke several school records, including most goals in a single season (25), most game-winning goals in a season (10), and most points in a season (53).

Last year she was selected fifth overall in the NWSL Draft, the second-highest a Canadian has ever been drafted, behind Quinn, who was picked third overall in 2018. Viens made her professional debut in last summer’s NWSL Challenge Cup, and scored her first pro goal in the semifinals, a 3-2 loss to the Chicago Red Stars.

Despite her status as a prolific goal scorer, Viens has largely flown under the radar. This is her first invite to a Canadian camp at any level.

“For me, it’s about assessing her in an environment with some fantastic players around her. I’m excited to see her and how she adapts in the environment,” said Priestman.

St-Georges was one of the breakout stars at last year’s NWSL Challenge Cup. She started in five of Chicago’s seven games, and her biggest moment came in the semifinal against Sky Blue FC, when she scored the opening tally against fellow Canadian Kailen Sheridan – a rare goal for the defender. St-Georges would add an assist on the game winner to help the Red Stars to a 3-2 victory, but the team would lose in the championship final to Houston.

In the NWSL’s Fall Series, St-Georges appeared in all four of Chicago’s matches, starting in three of them. She was later named the team’s Rookie of the Year.

“With Bianca, [she has] that Canadian mindset to do anything to make a tackle and win a ball back,” said Priestman. “At the same time, you would have seen in the NWSL Challenge [Cup], she gets forward with real positivity.

“She’s a bit of a warrior,” Priestman added. “Very front-footed – will anticipate any ball. She absolutely wants to be that defender that takes the ball off a forward. Very positive, athletic.”

St-Georges was drafted 20th overall by Chicago in 2019, but a knee injury postponed her professional debut until the Challenge Cup.

She has represented Canada at the under-17 and under-20 levels, and played under Priestman for several years, most notably at the 2014 FIFA U-17 Women’s World Cup. She started in all three of Canada’s group games at the tournament but was suspended for the quarter-final after receiving a red card in the match against Ghana.

Listro has had an unusual path to the national team. She was a part of the Canada Soccer pool of players at the under-17 level and took part in the 2012 FIFA U-17 Women’s World Cup, playing alongside Canadian mainstays like Kadeisha Buchanan, Ashley Lawrence, Nichelle Prince, Sheridan, and Quinn.

But once she began her collegiate career at the University of South Florida, the calls from Canada Soccer dried up. Despite being a four-year starter at USF, Listro was not selected at the 2017 NWSL Draft, leaving her unsure about her professional and international future.

She played in Spain for a year, and later spent time working at a medical technologies company. After deciding to make a comeback at professional soccer, she earned a tryout with the Orlando Pride before the 2020 season.

Last September, she signed a short-term contract with the Pride ahead of the NWSL Fall Series, where she started in three of Orlando’s four games and recorded an 80.5 per cent passing accuracy, second highest on the team.

Listro’s perseverance paid off earlier this month when Orlando signed her to a one-year contract with an option for an additional year.

“You see a real commitment there,” said Priestman.  “She brings that Canadian grit in the midfield – will do anything to win that ball back.”

Foster is currently living her dream. She grew up as a Liverpool fan, and last year she signed her first professional contract with the club. She even has a tattoo of “You’ll Never Walk Alone,” Liverpool’s anthem, on her left arm.

She made her professional debut on Oct. 7, 2020 in the Continental League Cup, helping Liverpool to an upset 3-1 win against Manchester United.

“I would say that Rylee’s potential is very high,” said Priestman. “Her going into a professional environment is only going to help her progress that. I’ve seen elements on that against top players.”

She also spent four years at West Virginia University, where she recorded 39 clean sheets, second most in school history.

“I’m excited to work with Rylee again,” said Priestman. “I think with Rylee, what you see is her ability to cut balls out of the air, which is fantastic…. She has shown that at youth level, she can compete on the international stage.”

Chang is one of the youngest players called into camp. She played under Priestman at the under-17 and under-20 levels. In 2017, she was named Ontario’s League 1 Player of the Year.

She was sidelined in 2018 from both international play and her freshman year at the University of South Carolina with a torn ACL. She said she had set a goal for herself to get back in the Canadian player pool, and in 2020 she was selected to the team for the Under-20 CONCACAF Women’s Under-20 Championship.

“Sam’s game has evolved a lot.  She warranted the call-up,” said Priestman.

While she has traditionally been a centreback, she has adjusted to a role in the midfield, and Priestman said that versatility is “really important.” In her redshirt sophomore year with the Gamecocks, she finished with five points and 670 minutes in 10 games.