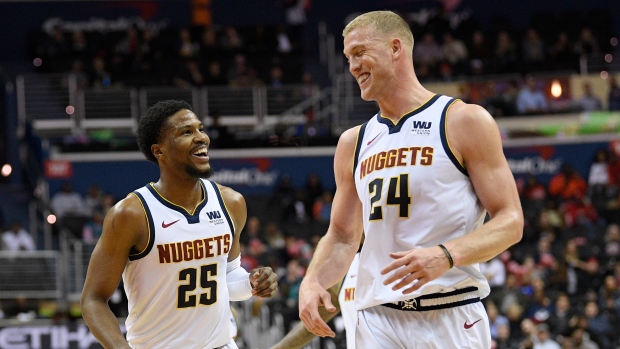 Nikola Jokic had 15 points and 11 assists, and the Nuggets used a balanced offence to edge the fading Washington Wizards 113-108 on Thursday night for their fifth straight victory.

Paul Millsap, Gary Harris, Jamal Murray and Torrey Craig also added 15 points for the Nuggets, who were playing for the first time since ensuring their post-season spot Monday in their win over the Celtics.

"I was really worried about this game just because of the hangover effect of clinching in Boston," Malone said. "To pull this out, even though it wasn't pretty, speaks to our team and not being satisfied."

Eight players reached double figures for Denver, which began its second of four on the road a half-game behind Western Conference leader Golden State. The Warriors played later Thursday.

Bradley Beal scored 25 points and Tomas Satoransky had 16 points and 10 assists for Washington, which lost its third straight.

Thomas Bryant added 22 points in his first start in a month, but the 11th-place Wizards' playoff hopes continued to dwindle. They're now six games back of eighth-place Miami with nine remaining.

"You try to be optimistic about it, but realistic at the same time, too," Beal said. "It's tough when you're in the position where you need help from other teams. They're trying to make it just like we are."

After both teams gave back double-digit leads in the third quarter, the Nuggets again went up by 10 early in the fourth.

Murray responded with a baseline layup and then Will Barton's 3-pointer from the right wing stretched Denver's lead back to seven.

It was still a three-point game when Harris missed a pair of free throws with under 10 seconds remaining, only to snatch his own rebound, absorb Beal's foul, and this time hit two from the line with just over 7 seconds left.

"I just saw an opportunity," Harris said of the rebound. "I wasn't going to miss those (second) two. I wasn't worried about it."

Nuggets: Won their 18th on the road, moving within four of a team record with seven left to play away from home. ... Mason Plumlee grabbed 11 rebounds, but was the only Nuggets player to see time who didn't reach double-figure scoring. He finished with four points. ... Jokic had six rebounds.

Wizards: Fell to 9-5 in the second game of back-to-back sets, after sliding to 2-12 in the first game in Wednesday's loss at Chicago. They have one more such set remaining. ... Rookie Troy Brown Jr. made his first NBA start in place of Trevor Ariza, who sat after straining his groin Wednesday. Brown finished with 13 points. ... Bryant made his first start since Feb. 22.

Malone's relief after the game followed his insistence before tip-off that there was still plenty of reason to focus.

"I think it's so important to make sure you're playing at the highest level you possibly can going into the post-season," Malone said. "And we've still got some things to play for. Being a division champion is something that we talk about. Trying to get that one seed, why not us? With 13 games to go, way too early to talk about preservation mode."

"Tonight was their night," Murray said. "The bench came in and handled business."