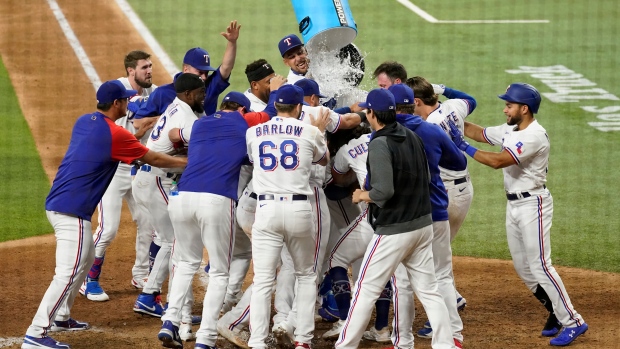 ARLINGTON, Texas (AP) — Jonah Heim hit his second walk-off homer in as many games right after a tying, two-run shot from Andy Ibánez in the ninth inning, and the Texas Rangers rallied again to beat the Seattle Mariners 4-3 on Sunday.

Heim and Ibánez both connected against reliever Erik Swanson, who hadn’t allowed a run since now-former Texas slugger Joey Gallo went deep against him in the same ballpark on May 8.

Swanson (0-1), who had gone 12 2/3 innings without allowing a run while spending more than a month on the injured list with a right groin strain, didn’t even get an out while seeking his second save.

With thunder from a passing severe storm echoing through Texas’ $1.2 billion retractable roof stadium, Nathaniel Lowe opened the ninth with a single before Ibánez sent a liner down the line in left field.

Heim drove a 2-2 fastball into the Texas bullpen in right-center field. It landed in about the same place as the first walk-off hit of the rookie Heim’s career — a two-run shot in the 10th inning of a 5-4 win the night before.

According to the Elias Sports Bureau, Heim is the first Texas player with walk-off homers in consecutive games and the first rookie to do it in the majors. The last big leaguer to do it was Albert Pujols with St. Louis in 2011.

Marco Gonzales was in line to win his third consecutive start after the Seattle left-hander had gone more than three months without a win.

Gonzales gave up five hits and struck out four — all in the middle of a Texas batting order missing Gallo after the rebuilding Rangers sent the slugger to the New York Yankees in a deadline deal.

The Rangers won for just the third time in 17 games while the Mariners finished 5-5 on a 10-game stretch against AL West rivals.

Abraham Toro had three hits to improve to 9 of 18 since joining Seattle in a deal with Houston before the trading deadline.

Mariners: RHP Chris Flexen (9-5, 3.81 ERA) is scheduled for Monday's opener of a three-game series at Tampa Bay. Flexen's road ERA (5.92) is more than three runs higher than his home mark, although he is 3-1 away from Seattle.

Rangers: RHP Dane Dunning (4-7, 4.20) is set for Monday's opener of a four-game series at home against the Los Angeles Angels. Dunning pitched a season-high 6 1/3 innings in his previous start, a 5-4 win over Arizona that ended Texas' 12-game losing streak.