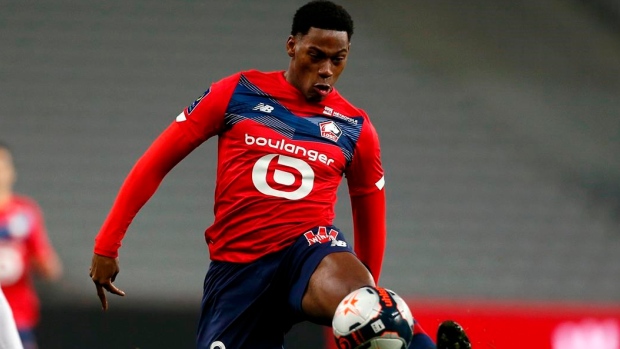 PARIS (AP) — Defending champion Lille dropped more points after a 1-1 draw against Brest in the French league on Saturday.

Both goals came in the first half. Canada forward Jonathan David put the hosts ahead in the 18th minute with a left-footed strike into the bottom left corner after a through ball from Jose Fonte.

Romain Faivre equalized for Brest in the 31st from a free kick.

Inconsistent Lille trails leader Paris Saint-Germain by 12 points after 11 matches. PSG, which has a game in hand, plays Marseille in the biggest match in French football on Sunday.

Lille reassured itself midweek with a gritty goalless draw with Sevilla in the Champions League and had aimed to build on the momentum against struggling Brest. Lille coach Jocelyn Gourvennec was also using the match to prepare for next week’s showcase game against PSG.

Lille is ninth and Brest 18th.

Nantes beat Clermont 2-1 in Saturday’s other match with both teams having a player sent off in the first half, including Johan Gastien, son of Clermont coach Pascal Gastien.

Ludovic Blas got the winner for Nantes on the hour mark at Stade de la Beaujoire. Nantes moved up to fifth with 17 points, four more than Clermont.

Lionel Messi, a veteran of Spanish “clásico” matches between Barcelona and Real Madrid, will experience his first “Classique” of French soccer when bitter rivals Marseille and PSG meet at the Velodrome Stadium on Sunday.