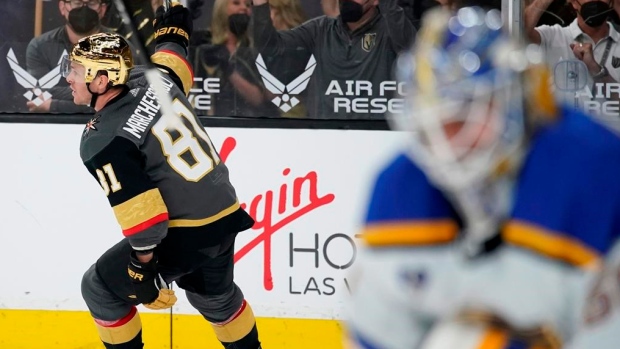 LAS VEGAS — Jonathan Marchessault scored with 17 seconds left in overtime to lift the Vegas Golden Knights to a 4-3 victory over the St. Louis Blues on Friday night.

After clearing the puck cross-ice to Alex Tuch on a give-and-go, Marchessault took the return pass after slipping behind two Blues skaters and beat Jordan Binnington over his glove, sending the NHL’s biggest crowd of the season of 7,567 into a frenzy.

Lehner stopped 22 shots to improve to 16-3-2 during the regular season since joining the Golden Knights last season.

The Golden Knights also inched closer to winning their third division title in four seasons since joining the NHL in 2017.

“Tonight was a night we were a little flat as a group and they got better as the game went on,” Vegas coach Peter DeBoer said. “That’s what you need to win consistently. Your big guys are going to score, but they can’t score every single night for you.”

Meanwhile, the Blues’ much-needed point in the standings coupled with Los Angeles’ loss to Colorado to clinch the final playoff berth in the West Division. The Blues have reached the post-season for the 44th time in franchise history, the most among non-Original Six clubs.

The Blues have earned at least one point in eight straight games (5-0-3) and will ride a four-game road point streak (2-0-2) into Saturday’s series finale with Vegas.

“Overall I thought guys competed hard throughout the whole game, 60 minutes,” St. Louis coach Craig Berube said. “Binner played well in net, guys did a good job. We found a way to get a point and that’s what we needed.”

Smith opened the scoring late in the first when he gathered a pass from Nic Hague at the doorstep and tapped it home with 6:37 left in the period. O’Reilly, who has 12 points over his last eight games, tied the game when he took Tyler Bozak’s pass from behind the net and buried a short-handed goal to tie it with 1:52 left in the first period.

St. Louis scored two goals in a span of 1 minute, 44 seconds to take a brief 3-1 lead in the second period.

First, it was Perron, who came off the bench in time to receive Zach Sanford’s cross-ice pass to the bottom of the right circle and fired the puck past Lehner to make it 2-1. Marco Scandella registered his 100th career assist on Perron’s goal.

Moments later, Schwartz ripped a shot from a tight angle just in front of the goal line, sneaking the puck under Lehner and just inside the far post to make it a two-goal game.

Martinez reignited the sold-out crowd when he blasted a one-timer from the point to cut St. Louis’ lead back down to one with 8.2 seconds left in the second period.

Roy notched his 10th point in his last 15 games with an equalizer midway through the final period, when he grabbed the loose puck after a scramble in front, spun around in the right circle, and roofed a wrist shot past Binnington glove side.

The Blues had a good opportunity to regain the lead when Lehner slipped while backpedaling, and Kyle Clifford skated around the back of the net to the opposite side — only to be stopped by Martinez, who dropped into a butterfly stance and stuffed the wraparound attempt.

“You want to impose your will and play your game,” Martinez said. “I sound like a broken record, but you’ve got to play playoff hockey before you get to the playoffs.”

Vegas was without leading goal-scorer Max Pacioretty for the third straight game. Pacioretty, who has 24 goals this season, has been out with an undisclosed injury.

St. Louis is one of three clubs to reach the post-season in at least nine of 10 seasons since 2011-12, along with the Pittsburgh Penguins (10) and Washington Capitals (9). Those three teams have won four of the nine Stanley Cup Finals in that span.