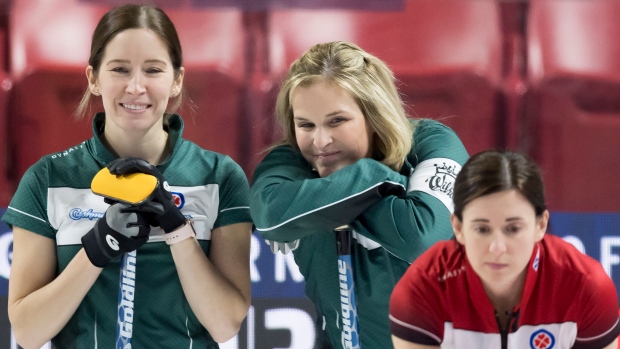 MOOSE JAW, Sask. – Jennifer Jones was not in a good position heading into the championship pool at last year’s Scotties Tournament of Hearts in Sydney, N.S.

The Winnipeg rink sported a record of 4-3, with the biggest blow coming on a two-loss day against lower-ranked teams in Prince Edward Island and New Brunswick. Three losses heading into the championship pool gives you no room for error as Jones and company finished outside of the playoffs. It marked the first the six-time Scotties champion missed the final four at the Canadian women’s curling championship in 14 appearances.

Fast forward a year and Jones has flipped the script.

Jones, third Kaitlyn Lawes, second Jocelyn Peterman and lead Dawn McEwen finished round robin play with a 6-1 record on Wednesday after beating Team Tracy Fleury in the wild-card game last week just to get into the main draw.

“You have a little bit of wiggle room. I feel like we’re playing well and making big shots when we have to, making good draws and we feel good about the speed,” said Jones. “All and all we just have to go in and try to be a little sharper and try to be better as the week goes on.”

Team Wild Card dropped their opener to Ontario on Saturday, but Jones and company have since reeled off six straight wins, including four contests that went to an extra end.

Jones said those down-to-the-wire games can only help with the team’s confidence going forward.

“I also think it’s important to have to make some last shots to win and we did. So that always gives you a little bit of confidence heading into some big games,” she explained. “It didn’t feel that much different coming in as Team Wild Card, to be honest. You’re just a little bit tired after that game.”

Now, the 2014 Olympic champion is in a far better position to make the playoffs and pursue a seventh career Scotties title which would pass Colleen Jones for most all-time.

Viktor Kjall is in his second season coaching Team Jones and said the foursome is just in a better place overall compared to their trying week last year in Cape Breton.

“We’re playing way better as a team. We know each other a little better. We know what we need to do to fire each other up when we need to. I think overall it’s just a better team performance so far,” said Kjall, who also works as the manager at the Granite Club in Toronto.

We feel good. I think we are in a good spot. It’s been a couple tough games lately, but they are all tough games here so we’re pretty happy with the record. Now we can park that and the tournament starts over tomorrow. We’re just going to take it from there.”

The native of Karlstad, Sweden, helped Niklas Edin capture the bronze medal at the 2014 Olympics in Sochi, Russia before coaching Scotland’s Kyle Smith from 2015 to 2018. When Kjall got the call from Team Jones to join forces, he was excited about the challenge.

“She [Jones] one of the best curlers of all-time,” he said. “So to have an opportunity to be a part of that I though it would be a great challenge for myself so I’m happy I got that opportunity.”

Just like the players, Kjall says he too is in a better place and feels more comfortable with the team this season compared to last.

“As a coach, it takes a little bit of time before you get to know them. And to know how to approach them because they are all different individuals,” said Kjall. “So, I feel like I’m in a good spot as well. As a whole, the unit is working really well right now.”

As for the championship pool format, which is now in its third year at both the Scotties and Tim Hortons Brier, Jones said she’s not a fan.

Prince Edward Island and Ontario will join Team Wild Card in the championship from Pool B, with the final spot to be determined in a tiebreaker Thursday morning between British Columbia and Nova Scotia.