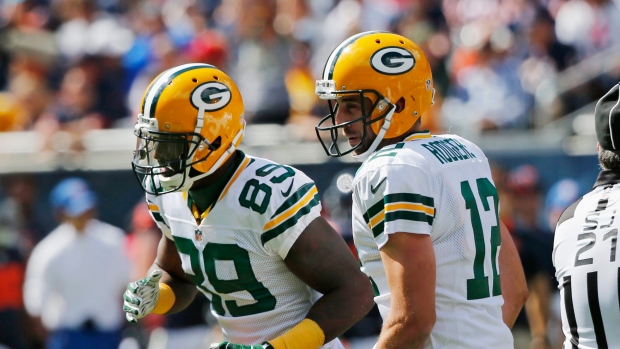 The Packers got all they could handle from the rebuilding Bears but took control down the stretch to beat them for the 10th time in 11 games, including the post-season.

Jones, who spent seven seasons in Green Bay before signing with Oakland last year, caught four passes for 51 yards. That included a one-handed grab on a 13-yard score late in the first quarter that left Rodgers flashing back to 2012, when Jones led the league with 14 TD catches.

He added a 1-yarder in the third — a good start after being released by the Raiders in the spring and by the New York Giants on the final roster cut. With Jordy Nelson (knee) out for the season, the Packers were quick to bring back Jones.

"No disrespect to James, but I don't think it was that out of character," Rodgers said. "Like many other guys that have gone elsewhere and come back, there is a comfort in this offence for guys who have flourished in it at times. And I think that Jones is one of those guys that really feels comfortable on offence."

Randall Cobb, hampered late in the preseason by a sprained right shoulder, had 38 yards receiving. He caught a 5-yard touchdown that made it 24-16 early in the fourth quarter, and Clay Matthews sealed the win by intercepting Jay Cutler at the Green Bay 20 and returning it 48 yards.

Eddie Lacy ran for 85 yards and a late touchdown. Julius Peppers chipped in with 1 1/2 sacks for the four-time defending NFC North champions.

"This is our starting point. This is who we are as a team today," coach Mike McCarthy said. "A lot of good things to go off of, a lot of things we can learn from."

The Bears, essentially starting over under Fox and new general manager Ryan Pace after a five-win season, kept this one close though Cutler had a rough afternoon. He was 18 of 36 for 225 yards, with that late interception by Matthews. He also threw a 24-yard touchdown to Martellus Bennett with 34 seconds left, but Green Bay recovered the onside kick.

"Green Bay is a pretty good football team," Fox said. "We were going to have to be near flawless to beat them and we didn't quite reach that. I think there was a lot of positive things that we'll be able to build on as a football team moving forward as we get ready for Arizona."

Matt Forte ran for 141 yards — 105 in the first half — and a touchdown. Alshon Jeffery caught five passes for 78 yards after missing the preseason because of a left calf injury. Robbie Gould kicked three field goals to give him 246 to surpass Kevin Butler as Chicago's all-time leader.

Green Bay, which outscored the Bears 93-31 over two games last season and beat them at Soldier Field for their 700th win, trailed 13-10 at the half. Rodgers finished a third-quarter drive with a 1-yard slant to Jones and Gould answered with a 44-yard field goal, cutting it to 17-16.

But the Bears stalled at the 2 after Cutler's 50-yard pass to Marquess Wilson. Cutler overthrew Eddie Royal in the end zone on fourth down after Chicago opted not to try a field goal.

"This was one game," Cutler said. "We've got 15 more. So we've got a lot of opportunities left to go out there and do it the right way and keep improving on where we are right now."

Notes: The Bears started two-time Pro Bowl RG Kyle Long at right tackle — a move that many saw coming after Jordan Mills got released a week earlier. Vladimir Ducasse started at right guard. ... This was Forte's fourth game with at least 141 yards and his highest output since he ran for 145 against Tampa Bay on Oct. 23, 2011. ... Packers LB Sam Barrington sat out the second half because of an ankle injury.