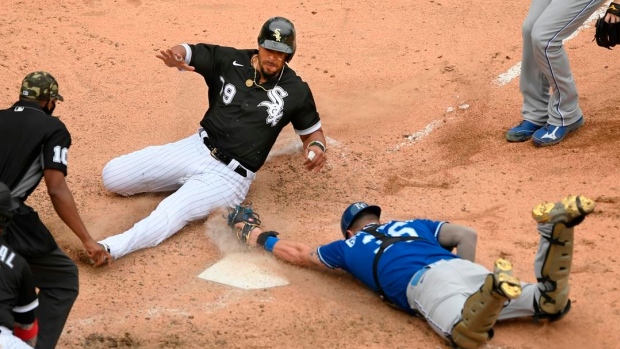 CHICAGO (AP) — Wade Davis bounced a wild pitch that allowed José Abreu to dash home with the game-ending run, and the Chicago White Sox rallied in the ninth inning to beat the Kansas City Royals 4-3 on Sunday.

Kansas City led 3-2 when Tim Anderson doubled off Davis (0-2) leading off the ninth.

Adam Eaton sacrificed and, with the infield in, Yoán Moncada lined a run-scoring single to center. Abreu was hit just above the left elbow by an 82 mph knuckle-curve.

Yermín Mercedes singled sharply to right and Whit Merrifield, a second baseman making his second appearance in right field this season, made a one-hop throw to catcher Cam Gallagher. Moncada, sliding headfirst, was tagged out near the left shoulder.

Abreu, injured Friday in a collision with Hunter Dozier, dashed home when Davis bounced a knuckle-curve off Gallagher, and Davis' 21st pitch of the inning ricocheted about 15 feet up the first-base the line.

Gallagher retrieved the ball and made a leaping tag attempt. Abreu missed the plate with his left leg but got his left arm on the the plate just ahead of Gallagher's mitt.

Matt Foster (2-1) struck out two in a perfect ninth. completing a six-hitter that gave Chicago a four-game split. The Royals had lost their previous four series, going 1-12 in that span.

Adam Eaton homered for AL Central-leading Chicago, which has not lost consecutive games since April 15-17.

Salvador Pérez, who left Saturday’s game in the eighth with left groin tightness, went 1 for 2 with a walk as the Royals' designated hitter.

Pérez hit a sacrifice fly in the first off Dylan Cease, who allowed an unearned run and three hits in 5 2/3 innings.

Chicago went ahead in the fifth when Eaton hit a two-run homer off Brady Singer, who gave up two runs and seven hits in 6 1/3 innings.

Kansas City took a 3-2 lead in the seventh when Aaron Bummer relieved Codi Heuer with two on, Merrifield hit a tying single and Carlos Santana followed with a sacrifice fly, a drive Eaton leaped to grab at the fence in right.

White Sox: OF Adam Engel (right hamstring strain) is close to heading out on a rehab assignment, according to manager Tony La Russa. “I've been watching a lot of his workouts and he certainly is looking more like himself,” La Russa said. “As far as getting back to 100%, he's getting very close.”

Royals: They haven't announced a starter yet for the opener of a two-game home series against Milwaukee Tuesday night. RHP Brandon Woodruff (2-1, 1.64) pitches for the Brewers.