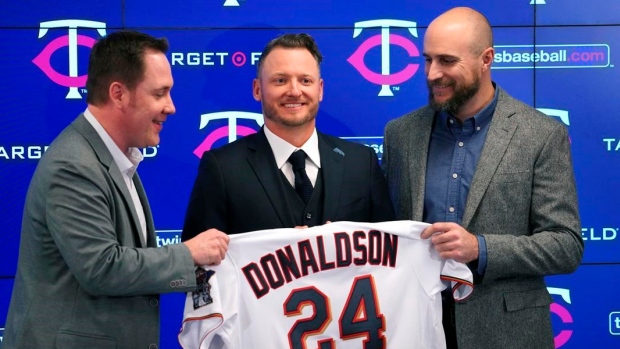 MINNEAPOLIS — Josh Donaldson's 2024 option with the Minnesota Twins can escalate an additional $4 million based on awards he earns during the first four seasons of the deal.

Donaldson and the Twins finalized a $92 million, four-year contract on Wednesday. He gets a $3 million signing bonus payable March 15, an $18 million salary this year and $21 million in each of the following three seasons. His contract includes a $16 million club option for 2024 with an $8 million buyout.

Donaldson has a limited no-trade provision allowing him to pick five teams he can't be dealt to without his consent. If he is traded, he would receive a one-time assignment bonus of $2 million payable by the acquiring team, and the 2024 option would become a $16 million mutual option with a $6 million buyout, payable only if the team declined.

Minnesota won 101 games last year and then was swept by the New York Yankees in the AL Division Series.

"The message I tried to get across to them was, 'Look, I don't want to just impact your team on the field. I want to impact the entire organization,'" the 34-year-old said Wednesday. "This could possibly be my final contract, at some point, and I want to leave an imprint on this organization for whenever I am finished playing."