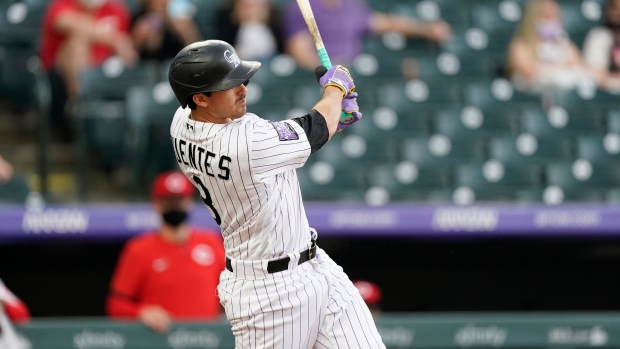 DENVER (AP) — Josh Fuentes homered for the second straight game to back seven shutout innings from Chi Chi Gonzalez, and the Colorado Rockies held on for a 13-8 victory over the Cincinnati Reds on Thursday night.

Gonzalez (2-1) scattered four hits in his longest outing of the season. He struck out two, walked one and was pulled after 88 pitches.

Jonathan India and pinch-hitter Tyler Stephenson homered late for the Reds, who shaved a 10-0 deficit to 10-8 with eight runs in the eighth.

Fuentes hit a two-run shot in the first inning off Luis Castillo, then added an RBI single in Colorado’s five-run fourth and another in the sixth to set a career high with four RBIs. Connor Joe had two hits and three RBIs to help the Rockies open the four-game series with a win.

Cincinnati rallied in the eighth against Colorado’s bullpen. Stephenson hit a two-run homer, and five straight singles made it 10-5. India, who started the inning with a single, hit a three-run homer to pull the Reds within two.

Colorado scored three times in the bottom of the inning, the last on a solo homer by Garrett Hampson.

Reds: Manager David Bell said RHP Michael Lorenzen (right shoulder) had positive results from a follow-up MRI and he will be able to start throwing soon in Arizona. ... 1B Joey Votto (thumb) has not resumed baseball activities.

Rockies: LHP Kyle Freeland (left shoulder) will have two rehab outings, Saturday and next Thursday, with Triple-A Albuquerque, manager Bud Black said. Freeland will throw 60-70 pitches Saturday. ... Black said INF Brendan Rodgers (hamstring) will start at second base for Albuquerque on Friday. ... SS Trevor Story was given the night off.

Cincinnati lost the game and a couple of players, too.

Center fielder Nick Senzel ran into the wall trying to track down Joe’s double in the first inning and left in the third with a bruised left heel. First baseman Mike Moustakas exited in the fifth inning after running into the netting in foul territory in the fourth. He had his finger looked at by the trainer, stayed in for the rest of the inning but was replaced by Alex Blandino in the fifth.

Gonzalez's only career complete game came in his second major league start on June 5, 2015, with Texas.