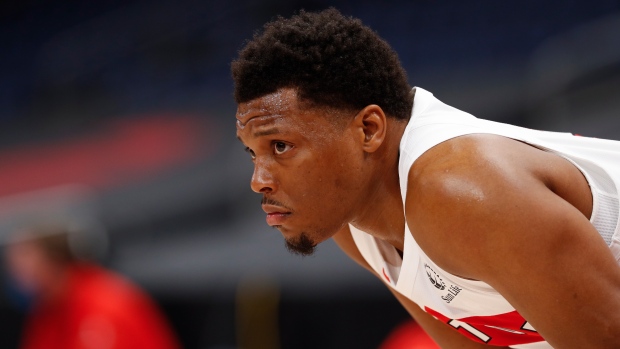 TORONTO – 2017 free agency didn’t unfold the way Kyle Lowry had expected, though the end result wasn’t exactly a disappointing one.

The result was a brand new $100 million contract, and it turned out pretty well for the veteran point guard and the franchise that he’s become synonymous with.

Lowry helped lead the Toronto Raptors to an NBA championship a couple of years later. He went on to sign an extension worth another $31 million and solidify his status as the greatest player in team history. All that is to say, there are no complaints, from either side.

However, at the time, Lowry saw things playing out differently. He was coming off a career 2016-17 season and was looking forward to being wooed in free agency. He was open to the idea of returning to Toronto, but by all accounts, he had planned to test the market and was ready to move on if another appealing opportunity presented itself.

It never did. The market for point guards, and Lowry in particular, dried up quickly. There was a short list of teams that had significant salary cap space and a need at the position, and most of them opted to go in different directions. His hometown Philadelphia 76ers moved up in the draft to select Markelle Fultz. Denver used its space on Paul Millsap, Utah traded for Ricky Rubio, and San Antonio didn’t reciprocate Lowry’s interest.

In good faith, Toronto offered Lowry what he was worth and he took it. It was his best option. It was also one of his only reasonable options.

Lowry is 35 now, four years older than he was then. At this stage, most guys would be content to play out their remaining years in the NBA on a veteran minimum salary, if not contemplating retirement. Not Lowry.

When free agency opens at 6:00 p.m. ET on Monday, he’ll be the belle of the ball. This time, his services will be in high demand, and he’ll decide how things play out – not just for the Raptors, but for several teams around the league.

The stars have aligned for him in the summer of 2021.

He’s not the player he was back in 2017, but he’s also not far removed. Fitting, as delightfully – or, in some cases, not so delightfully – stubborn as he can be, that he’s managed to defy the laws of aging. He’s still a valuable player that impacts winning and elevates his teammates, and with age, he’s become a better and more experienced leader.

That the teams who decided not to go all-in on him at the trade deadline – Miami, Philadelphia and the Lakers – all flamed out in the playoffs won’t hurt his leverage. And then there’s the Chris Paul effect. Teams have seen what a really good veteran point guard can do to help expedite the process for a young, up-and-coming group, like Paul did for Phoenix during its unexpected run to The Finals this past season.

Lowry, an unrestricted free agent for the third time in his career, is about to be very popular.

In the history of the NBA, only three players age 35 or older have signed a contract for at least $20 million annually over multiple years: LeBron James, Kobe Bryant and Dirk Nowitzki. Barring something unforeseen, Lowry will be become the fourth.

But what team will give it to him? Where does Lowry want to be? That’s not just the biggest question; it’s also the first question and the domino that will dictate which direction the Raptors take in free agency.

He could have up to six or seven real suitors. That list includes Toronto, who remains open to bringing Lowry back and having him continue to add to his Raptors legacy while mentoring its young core, but has set limits in terms of how much its willing to spend, according to sources.

“We can keep him, he can walk or we can facilitate a [sign-and-trade] deal where maybe he gets to go to a place where he otherwise wouldn't get to go and we get a little bit of value in return,” said Raptors general manager Bobby Webster, outlining the three options for Lowry and his team following Thursday’s draft. “So we'll quickly turn to that now that the draft is over and the teams have a bit more sense of cap space and money… We'll be thorough as always and obviously do what's best for us and, at the same time, listen to Kyle and see what he wants to do.”

There are teams like the New Orleans Pelicans, Dallas Mavericks, and New York Knicks, who have opened up the requisite cap space to make a significant offer, and will try to sell Lowry on emulating the Suns model. Could he be enticed by the idea of pairing with Zion Williamson, Luka Doncic, or Julius Randle and helping those organizations take the next step towards competing for a title? For a deal that pays him north of $30 million annually, maybe. However, it could be a tough sell for Lowry, who is said to be eyeing destinations with clearer paths to championship contention over the next couple years.

Miami has long been seen a frontrunner in the Lowry sweepstakes, as multiple reports reiterated on the eve of free agency. Lowry has been living comfortably in the state of Florida since the Raptors relocated to Tampa last season and is close friends with Heat forward Jimmy Butler. There’s mutual interest between player and team.

In a somewhat surprising move, the Heat picked up its $19.4 million option on the final year of Goran Dragic’s deal Sunday, meaning it no longer has the cap space available to sign Lowry outright.

There are a few ways to make sense of this, and more than one of them can be true. Dragic could be insurance for Miami in case Lowry decides to go elsewhere. It might be the precursor to a sign-and-trade with Toronto, which could send Dragic’s contract and an asset or two (young players or picks) to the Raptors, while landing Lowry in South Beach. They might also be confident that they could unload Dragic on another team in the event that the Raptors won’t play ball and they need to free up space.

If Lowry decides he wants to go home, Philadelphia – another interested but above-cap team – would also need Toronto’s help in facilitating a sign-and-trade. In that scenario, could Ben Simmons be in play, and if so, what would the Raptors need to attach to Lowry to satisfy the Sixers’ still-lofty asking price?

This is where the Raptors have some agency. If Lowry does leave, they can open up between $20-28 million, depending on whether they renounce the rights to their other free agents and decline their team options. That would be enough to try and poach one of the restricted free agents that they’re believed to have interest in – Cleveland Cavaliers big man Jarrett Allen or Pelicans guard Lonzo Ball – or chase Sacramento Kings UFA centre Richaun Holmes, who they’ve also been tied to.

But if they go the sign-and-trade route, that would cut into their available cap space and maybe eat it up altogether, depending on how much salary they take back.

Let’s say that Lowry wants Miami, which at this point seems to be the most likely scenario. The Raptors would no longer have cap space if they took on Dragic’s deal, even if they bought him out, which is why the Heat would need to sweeten its offer to make it worth Toronto’s trouble. They wouldn’t include Tyler Herro in a trade package at the deadline; would they be more inclined to do so now? Would Precious Achiuwa or KZ Okpala be enough to get the Raptors on board?

Webster and Masai Ujiri might have a tough decision to make, assuming Lowry leaves and doesn’t go to a team he can sign with outright. Do they let him walk, get nothing for him – at least not directly – but create enough cap space to try and replace him in free agency, or do they help him land in his preferred destination and get as many assets as they can in return?

There’s also another scenario, one that most people aren’t even considering. What if Lowry winds up back in Toronto? It does feel like his remarkable nine-year tenure with the Raptors is nearing its end. But how many times have we said that before? How many times has he – or the team – thought it over the years? He was nearly traded to the Knicks in 2013. He almost left as a free agent in 2014, and then again in 2017. They were close to sending him to Memphis at the 2019 trade deadline, and everyone assumed he was a lock to be dealt this past March.

Would it be that shocking if they ended up back together again? It’s not likely, to be fair, but chances of another reunion are higher than most people seem to think.

One way or another, the Raptors have to capitalize on the Lowry money/roster spot. They’ve already invested in the trio of Pascal Siakam, Fred VanVleet and OG Anunoby, who are either in or about to enter their early prime years. Malachi Flynn has three seasons left on his rookie deal. When he signs his rookie deal, Scottie Barnes – the fourth-overall pick in last week’s draft – will have four. This could be the last summer in which they’ll have cap flexibility over the life of those contracts.

If they’re bringing Lowry back, they’re operating as an above-cap team, which likely means retaining RFA guard Gary Trent Jr. and exercising team options on guys like Chris Boucher, DeAndre Bembry, Yuta Watanabe, Paul Watson and Freddie Gillespie, who’s guarantee dates are all coming up over the next month or so.

If he’s going elsewhere, who are they getting back or using that cap space on, and what will those pieces tell us about their intentions in the short and long-term?

It should be an interesting free agency period, and this time, Lowry is at the forefront of the action.​