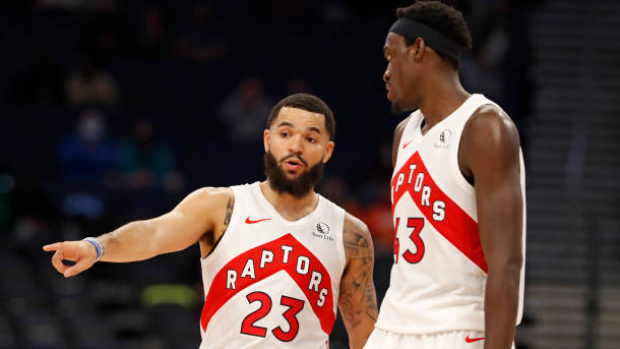 TORONTO – Fresh off a quick trip to Los Angeles, where he cleared one of the final hurdles in a five-month long rehab process, Pascal Siakam was back on the Scotiabank Arena court getting in some work ahead of the Raptors’ Friday evening game against Cleveland.

Recently, Siakam has ramped up his on-court work. He’s been practicing, taking contact, and even making the short drive to Mississauga where he’d workout with the G League team on days the parent club was off or had a game scheduled.

He’s been making progress towards a return, but first, he needed to get the green light from the L.A. doctor who performed his shoulder surgery over the summer. With a clean bill of health, he and the Raptors can now look ahead to his season debut, which could come as early as next week.

“He’s getting closer everyday,” Nick Nurse said prior to Toronto’s tough 102-101 loss to Cleveland. “Everything has checked out pretty good. He’s hit all the checkmarks is where he’s supposed to be, or maybe even a little ahead [of schedule].”

Siakam’s impending return could be timely.

Friday’s loss snapped the Raptors’ five-game winning streak, and in Nurse’s words, it was a “strange” defeat. Over the course of 48 minutes, Toronto only trailed for 4.8 seconds, but it was the final 4.8 seconds.

The Cavs got 12 fourth-quarter points from third-year guard Darius Garland, some fortunate bounces on both ends of the floor – Jarrett Allen’s banker from 25-feet out comes to mind – and a little bit of help in the form of some questionable officiating, as Nurse was happy to point out afterwards.

It was a lot of the ball bouncing the wrong way… Just one little break goes our way and it’s over, but it just didn’t happen.”

After Garland hit a pair of free throws to give the visitors their first lead of the night, the Raptors had a chance to win it but OG Anunoby’s step-back jumper rimmed out and Scottie Barnes missed a tip-in at the buzzer.

Cleveland is much improved, but the loss stings considering how winnable this game was and how difficult the schedule gets from here. They’ll host Brooklyn on Sunday before visiting Boston and Philadelphia on back-to-back nights next week.

Still, this was another encouraging performance from a young Raptors team that continues to turn heads early in the campaign. Barnes returned after missing two games with a thumb sprain and went toe-to-toe with another rookie standout, Evan Mobley. Barnes scored 14 points and grabbed nine boards, including one he ripped away from Allen as he flipped the Cavs’ centre over his back in the fourth quarter.

Anunoby scored nine of his game-high 23 points in the final frame and showed his evolution as a playmaker with five assists on the night. Fred VanVleet and Gary Trent Jr. combined to hit seven of their 12 three-point attempts, Khem Birch had another solid outing, while reserve points guards Dalano Banton and Malachi Flynn gave Toronto good minutes off the bench.

Given the modest pre-season expectations, and the fact that they’ve been playing without their leading scorer, a 6-4 start is nothing to scoff at. Now, they’re getting set to add a player that’s a year removed from being named All-NBA.

Siakam underwent surgery in early June to repair a torn labrum in his left shoulder, an injury he sustained in a loss to Memphis late last season. The initial timeline had him returning in the second half of November, but it appears he’ll beat that estimate by a week or two.

The Raptors have a couple days in between games early next week, which will allow them to get the 27-year-old forward into a hard practice or two, and see how far away he is. They won’t throw him into the fire, not with a very tough back-to-back coming up on Wednesday and Thursday. It’s possible he plays in one of those games, but probably more likely that they’re targeting a Saturday return, at home to the Pistons.

Considering it’s been six months since he’s played in a game, the plan is to ease him back. He’ll almost certainly be on a minutes cap to start.

However, with Barnes returning on Friday, Siakam getting closer and Yuta Watanabe – who’s been out with a calf strain – not far behind, it’s tempting to think about what this team might look like when it’s fully healthy.

“We’re gonna be really good,” Barnes said. “We’re already really good now. But at full strength, seeing how we play, we’re gonna have even more length [and more people] that can score and that can play defence.”

Nurse has some decisions to make once his team is back to full strength. Siakam will reclaim his spot in the starting lineup, which means somebody has to come out, and it’s hard to imagine it’ll be Barnes or Trent. Would they consider starting small? And with Birch, Banton, Flynn and Svi Mykhailiuk all playing so well of late, what will the second unit look like?

Nurse admitted he’s thought about it. It’s only natural. Occasionally, he’ll sit down at his dry erase board and start scribbling down some rotation ideas before thinking, “why am I even doing this?” Between injuries, foul trouble, guys playing well and others having an off night here and there, the rotation is constantly shifting.

“I probably won’t give it too much serious thought until we get this two-day break next week in between games when I’ll probably start getting the dry erase board out and start doing it a little more seriously,” he said.

They’ll need to figure a few things out between now and then, but it’s a good problem to have. These Raptors have been one of the NBA’s biggest and most pleasant surprises 10 games into the season, and their best player – or, at worst, their second or third-best player – hasn’t played a single minute. How good can they be when Siakam finally makes his long awaited return to the court? We’ll find out soon