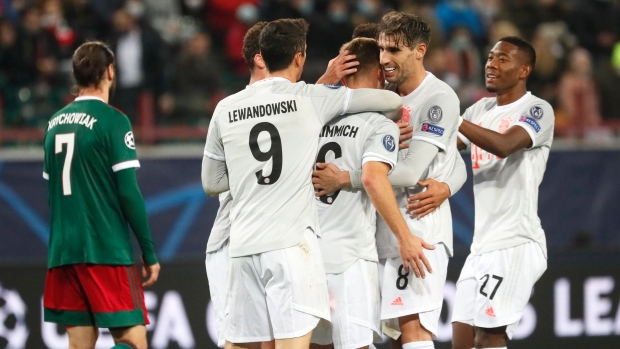 Kimmich ensured Bayern went unpunished for a sloppy performance when he took the ball from Javi Marti´nez, turned and fired inside the far post in the 79th minute.

“We’ll take the win but we know we didn’t dazzle,” Kimmich said.

Leon Goretzka had opened the scoring in the 13th, but Bayern failed to make its possession count and uncharacteristically yielded chance after chance for the home team.

Anton Miranchuk eventually equalized in the 70th thanks to a low cross from Zé Luís.

Zé Luís then missed a good chance to set up substitute Rifat Zhemaletdinov for the lead minutes later when he decided to shoot and fired wide.

Lokomotiv was to rue the miss when Kimmich stepped up to earn Bayern its second win from two games in Group A.

“We can be happy with how we came back,” Bayern goalkeeper Manuel Neuer said.

Bayern had scored 47 goals over its previous 12 wins but Lokomotiv’s players showed no signs of being overawed.

Fedor Smolov had the game’s first big chance and gave an inkling of what was to come by heading straight at Neuer in the third minute.

Robert Lewandowski then missed a good opportunity from a corner at the other end. It was to be a quiet game from the Poland star, who has 10 goals already in five Bundesliga games.

Goretzka broke the deadlock when Corentin Tolisso sent a diagonal pass to the far side and Benjamin Pavard volleyed the ball back into the centre for the Germany midfielder to head inside the post.

Bayern almost scored again in a similar manner but this time Kingsley Coman’s effort from Pavard’s volley came back off the post.

Lokomotiv refused to bow. Neuer got down to push Maciej Rybus’ effort out for a corner before the break, when Hansi Flick gave his players a stern look.

The Bayern coach made two changes, bringing on Javi Marti´nez to shore up midfield and Serge Gnabry to energize the attack. Thomas Müller, who matched Klaus Augenthaler’s 545 competitive appearances for Bayern, made way along with Goretzka.

Gnabry missed Bayern’s previous two games due to a positive result for the coronavirus, but all tests since were negative and he rejoined the squad on Monday.

Lokomotiv defender Vedran C´orluka went off for Slobodan Rajkovic´, who earned a kiss from goalkeeper Guilherme for blocking Kimmich’s effort before the hour-mark.

Daniil Kulikov brought Lewandowski down in the area, but the penalty was taken back through VAR for an offside decision in the buildup.

Kimmich made sure it didn't matter with his shot from outside the box.

“It's something I'd been working on. It wasn't really my forte as a youth as I was lacking a bit of shooting power, but lately it's been working quite well,” Kimmich said.

Atlético Madrid was hosting Salzburg in the other group game later.