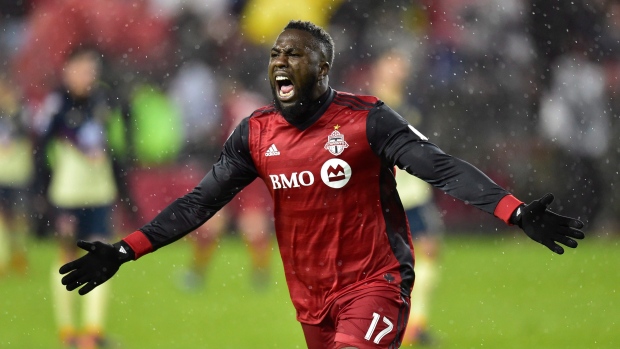 One day before Toronto FC opens their playoff campaign at home against D.C. United, star striker Jozy Altidore remains questionable for the contest.

If Altidore is able to return to the lineup on Saturday it would be a boost for TFC; the 29-year-old has often been front and centre for the team’s biggest moments.

The last time the Reds made the MLS Playoffs, in 2017; Altidore played a starring role as the team claimed their first MLS Cup. After getting suspended for the first leg of the Eastern Conference Final for a half-time scuffle with New York Red Bulls players in the semifinals, Altidore returned to score a second-leg goal that propelled TFC past Columbus Crew SC 1-0 and into the MLS Cup.

And then it was his iconic second-half goal that held up as the winner as Toronto FC beat Seattle Sounders FC 2-0 to claim the championship, with Altidore being named MLS Cup MVP.

Last season was a disappointing one for Toronto FC in MLS, but the team and Altidore had an incredible run in the CONCACAF Champions League.

Altidore’s success stretches back to his arrival in Toronto in 2015. Joining the club alongside fellow striker Sebastian Giovinco, Altidore helped launch the most successful era in Toronto FC history. The New Jersey native began that 2015 season with a brace and MLS Player of the Week award in his first game. He finished it by helping TFC advance to the MLS Playoffs for the first time in club history, scoring 13 goals along the way. 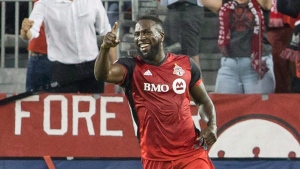 Altidore was similarly impressive in 2016, scoring 10 league goals and helping Toronto FC advance to the MLS Cup before losing to Seattle in penalties.

His arrival in Toronto also coincided with TFC’s returned success in the Canadian Championship. The team won in his first three appearances in the tournament (2016, 2017 and 2018) before finishing runner-up this season.

In 138 appearances across all competitions for Toronto FC, Altidore has 71 goals, ranking him second on the club’s all-time list behind Giovinco’s 83.

Altidore signed a three-year extension ahead of this season, keeping him with the Reds through the 2022 season. Despite battling injuries throughout the year, he’s netted 11 goals in 22 games, helping Toronto FC bounce back from their disappointing 2018 season and return to the MLS Playoffs.