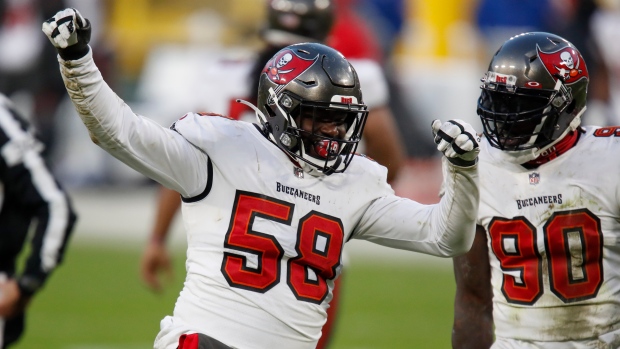 Tom Brady's signing with the Buccaneers as a free agent last winter spawned hope that brighter days were ahead for a once-downtrodden franchise.

To deliver on that hope, Brady needed some relentless play from Tampa Bay's defence.

“We played like our life depended on it,” Jason Pierre-Paul said Sunday after the Bucs forced two more turnovers and sacked Aaron Rodgers five times to key a 31-26 victory that sends Brady to an unprecedented 10th Super Bowl. And Tampa Bay to its first since the 2002 season.

Keeping the core of an improved defence together was critical, too, in going from 7-9 last season to making the playoffs for the first time in 13 years. And then getting to back to the NFL title game for the first time since those 2002 Bucs won it all.

In the days after luring Brady from New England, Bucs general manager Jason Licht placed the franchise tag on linebacker Shaquil Barrett and re-signed Pierre-Paul and tackle Ndamukong Suh — moves coach Bruce Arians felt were also necessary to give the team a chance to be special this season.

Barrett had three sacks and Pierre-Paul had two Sunday, when Tampa Bay showed the success it had against Rodgers during a 38-10 rout of the Packers in the regular season was no fluke. In the earlier game, the Bucs sacked the Green Bay star four times and intercepted him twice, returning one for a touchdown and the other to the Packers 2.

“Shaq played great. I played great,” Pierre-Paul said. “We both knew we had to have big games to make it work.”

A week after forcing four turnovers in Tampa Bay’s divisional round victory over Drew Brees and the New Orleans Saints, Sean Murphy-Bunting’s interception set up a touchdown just before halftime. Devin White scooped up a fumble to set up another TD that put the Bucs up 28-10 in the third quarter.

The Packers came back, but the defence forced Green Bay to settle for a field goal with just over two minutes remaining and trailing by eight points. Rodgers never got the ball back.

Safety Jordan Whitehead, who forced the fumble that White recovered to set up Brady’s third TD pass, sat out the fourth quarter after leaving with a shoulder injury. He said it was difficult watching the Packers chip away at the lead, but he never doubted his teammates would finish the job.

For one, he was confident the defence would either hold Green Bay to a field goal or stop a 2-point conversion if Rodgers got them into the end zone on the Packers' final drive.

And he was confident the Brady-led offence would not give the Packers' offence another chance.

“We still had a lot of hope. I never doubted them,” Whitehead said.

“I think coming into this game we had the confidence coming off last week as underdogs. Being underdogs again just put a chip on our shoulder,” Whitehead added. “A big thing that we’ve been working on all year is getting turnovers, and we’re making it happen.”

The Bucs have seven takeaways in three games this post-season, and the Brady-led offence has converted them into six touchdowns.