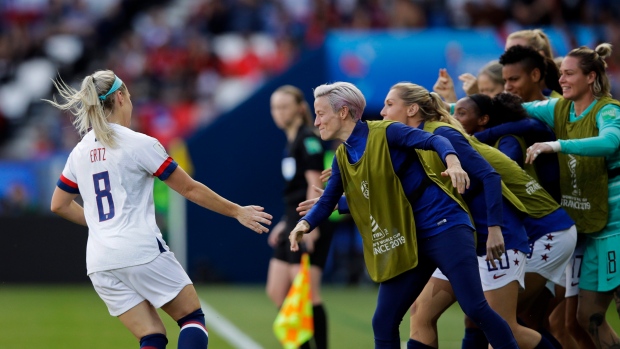 REIMS, France — Julie Ertz returned to the United States' starting lineup against Spain on Monday after a hip contusion kept her out of the team's last match at the Women's World Cup.

Coach Jill Ellis did not start midfielder Lindsey Horan against Spain, replacing her with Samantha Mewis. Horan had a yellow card in the team's second match. Players who accumulate two yellow cards through the quarterfinals must sit out the next game.

The winner of Monday's match faces France in the quarterfinals in Paris on Friday night.

Alex Morgan started for the defending champions despite sitting in the second half against Sweden after a couple of hard collisions. She joined Megan Rapinoe and Tobin Heath up top.

Goalkeeper Alyssa Naeher and defender Abby Dahlkemper both made their fourth straight starts.

Sauerbrunn was at centre back for the third straight game alongside Dahlkemper, with Kelley O'Hara on the right and Crystal Dunn on the left.

Rose Lavelle and Mewis rounded out the midfield with Ertz.

Spain, playing in its second World Cup but making its first appearance in the knockout round, had just three lineup lineup changes from its last match, a scoreless draw against China to conclude the group stage.

Seven of Spain's players have started each game in France, including Jennifer Hermoso, who went into the match against the United States with a team-leading two goals.