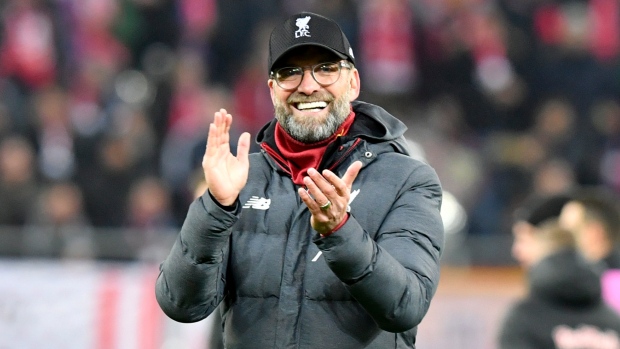 LIVERPOOL — Jürgen Klopp extended his contract as Liverpool manager until 2024, the Premier League club said Friday, in a further boost to its bid to become English champion for the first time in 30 years.

“This club is in such a good place, I couldn’t contemplate leaving,” said Klopp, who led Liverpool to the Champions League title last season and has guided the team to an eight-point lead in the Premier League this season.

Klopp, who has signed a 4 1/2-year extension deal, joined Liverpool in October 2015 and has built one of the best English teams in a generation.

Liverpool lost only one game last season, when the team finished second behind Manchester City in the Premier League before becoming European champions for a sixth time.

This season, Klopp’s team is unbeaten in the opening 16 games in the league, winning 15 of them. With City slipping 14 points behind in a disappointing title defense, only second-place Leicester appears capable of stopping Liverpool from winning its first English championship since 1990 and 19th in total.

“When the call came in autumn 2015, I felt we were perfect for each other,” said Klopp, who previously coached Borussia Dortmund. “If anything, now I feel I underestimated that. It is only with a total belief that the collaboration remains totally complementary on both sides that I am able to make this commitment to 2024.”

Fenway Sports Group, the Boston-based ownership of Liverpool, said it was “building from a position of strength” in “one of the big moments of our stewardship” of the club.

“If Liverpool Football Club were looking to appoint the most outstanding, elite manager for our current status today, Jürgen would be the first choice – no question,” FSG said.