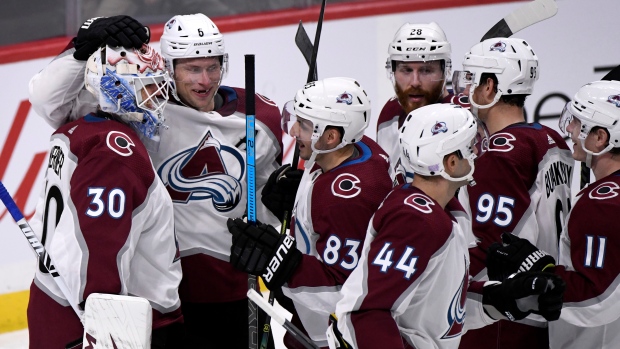 - Colorado goaltender Adam Werner had quite the NHL debut on Tuesday night. Starter Pavel Francouz was injured 31 seconds into the Avalanche’s game against the Jets, forcing Werner to come off the bench. He managed to blank the Jets the rest of the way. Because Werner didn’t start and play the entire game, he doesn’t get credited with the shutout – neither goalie does. The Jets fired 40 shots at Werner, including 19 in the third period. He already looks like a veteran.

- Avalanche defenceman Cale Makar leads all rookies in points this season with 18 in 18 games. Makar has scored in three straight games (four goals) and he has a five-game point streak where he’s earned seven points. Makar is coming off being named one of the NHL’s three stars last week. Makar’s goal-scoring streak has helped the Avalanche win three in a row, with the team scoring 17 goals over that span. Pretty good, considering the offensive injuries they’re dealing with.

- The Blues had their seven-game win streak end Tuesday night, but they’re still streaking in points, going 7-0-1 in their last eight games. They’re averaging more than three goals for per game in that span, with their power play clicking at almost 31 per cent. The Blues don’t have the longest active point streak in the league, however. That title belongs to the Islanders and Capitals, both at 12. The Islanders have gone 11-0-1 in their last 12 games, allowing exactly two goals against per game in that span. What’s remarkable about the Islanders run is that they don’t have a single player who is averaging a point per game and their power play has gone 2- for-19 during the point streak. The Capitals are 10-0-2 in their last 12 games, and they are filling the net, averaging more than four goals per game during their streak and their power play is 10-for-40.

- Going into Tuesday night’s road game in Anaheim, the Detroit Red Wings had lost seven straight away from home, scoring only nine goals. Things didn’t look too good for them being down 3-1 late in the second, but they rallied to win in overtime. Detroit is now 3-7-0 on the road this season, but that’s not as bad as the Chicago Blackhawks and Ottawa Senators have been. Both of those teams only have one road win in 2019-20.